It’s time for a tipple at Platinum Al’s Virtual Hot Tub.  This one’s an old classic – I’m sure you’ve tried it, if not – enjoy! 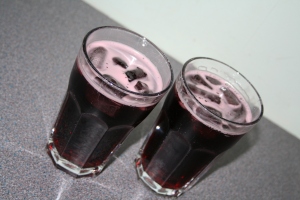 Really simple to make: pour one measure of port into a large tumbler.  Top up with WKD of the blue variety.

You will create a drink that looks, smells and tastes just like a fizzy Vimto – but with a hidden punch.

Play around with the amount of WKD you add – but the colour should be a dark purple, not translucent at all.

It’s been a long while since I was introduced to the Cheeky Vimto, and it became a favourite for a while.  It was the Vodka/Redbull of it’s day.  I have fond memories of introducing this drink to several weary travellers when we got home from Amsterdam on Baz Coppack’s stag do.

Say “rad” or “killer” instead and avoid looking like a chimp.