What is the best programme on Television right now?  I’ve been watching the magnificent The Walking Dead, obviously; and just started with Under the Dome.  I can still quite happily get my daily fix of Man Vs Food and Come Dine With Me.  But the absolute best thing on TV right now?  It’s a kids’ show.  It is: The Aquabats! SuperShow!

Chronicling the adventures of five super heroes, The Aquabats! Super Show! melds live action comedy and animation in a combination that entertains kids and adults alike.  They are a five-piece rock band, who also happen to be fearless adventurers ready to save the world from the powers of evil. 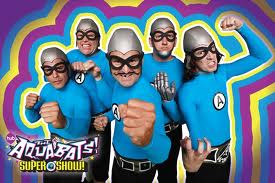 Although they all wear identical uniforms, each of the Aquabats possess unique characters and powers (as well as playing different instruments).  The MC Bat Commander is the leader (and frontman) of the group, though his decisions are not always the most sound.  Bass player Crash McLarson has the ability to grow in size when he becomes “emotional”.  EagleBones Falconhawk plays a mean laser guitar and has an invisible spirit bird, called The Dude, to aid in tricky situations.  Health conscious Ricky Fitness is the drummer with super speed.  And then there’s Jimmy the Robot, keyboard playing android scientist with gadgets galore.

The Aquabats travel together in their Battle Tram; fighting an array of super villains, mad scientists, mutants and monsters.  Everything from zombies, mummies, circus freaks and things from outer space pop up in their absurd adventures.  Like a hybrid of the 1960’s Adam West Batman, the Monkees and Scooby Doo – this show has it all.

I love The Aquabats! Super Show! so much.  In fact the whole family are converted now, following my relentless promotion of the programme at home.  The only negative of this show is that I wish I’d thought of it.  It’s such a cool, and clever, idea.  The fun they must have thinking this stuff up.  Rock stars who are super heroes, fighting crazy aliens and creatures?  It’s B-movie, camp ridiculousness that manages to shoe-horn in as much pop culture as anyone could ever want.

You can catch The Aquabats! Super Show on CITV regularly.  Or buy Series 1 here.  Whatever, just watch it, you’ll love it!