An interesting one, this – not exactly a shocker, but undeniably creepy.  Shadow of the Vampire proposes that the classic silent film Nosfertu (1922) employed an actual vampire to portray it’s evil protaganist, Count Orlock.  Set during the production of the film, Director F. W. Murnau (John Malkovich) decides that only a real undead creature can portray the villain of his story.  As a result, the production is plagued by catastrophe as the vampire’s natural urges threaten to derail the project. 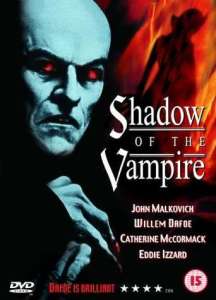 Willem Dafoe is almost unrecognisable as Max Shreck, the vampire playing a vampire.  He gives a fantastically eerie performance, superbly impersonating the Orlock of the original movie and also bringing his own air of barely contained menace.  Malkovich shows his skills as the driven perfectionist trying to keep together a production that is teetering on the brink of collapse.

To truly get the most from Shadow of the Vampire, the audience needs to be familiar with the source material.  But then, if you’ve never seen Nosferatu – you should be ashamed of yourself.