I’ve been to a few all day events, such as Memorabilia at Birmingham NEC , but nothing like this.  The Sci-Fi Weekender is basically a convention over several days, held at a holiday park in North Wales.  There are guest speakers, merchandise, film showings and entertainment – all in one location.

My friend Glyn had won tickets for the event, but sadly was unable to go.  So he donated the tickets – and accommodation – to yours truly.  A total gent.  My comrades Adam, Greeny, and Kurt – plus Platinum Al – thus made the trip to check out what was going on.

This is part one of the adventure.

Im a nice Dalek! Would you like to come for tea?

The Simpsons, relaxing with Duff Man

Our party left late on the Friday, due to work commitments.  With additional traffic problems on the A Double 5, when we arrived it was already dark.  No matter – the four of us found our chalet, dumped the luggage and went exploring.

Festivities were already well under way.  There was plenty of beer available, and many merry (though friendly) sci-fi types in various states of refreshment.  Several were dressed as characters from film, TV, books and comics; presenting a fantastic menagerie of fantasy figures.

Entertainment on the first night began for me with Professor Elemental.  The Professor is a purveyor of fine steampunk rap, apparently known as “chap-hop”.  Wearing pith helmet and rapping about tea and the British Empire, I found his act captivating and funny in equal measure.  Weaving funky beats out of old brass band music is no mean feat but the Prof raised the roof.  Catch him if you can, I promise a night you won’t forget! 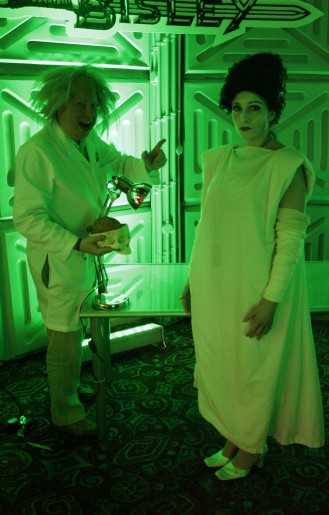 These two were a lovely couple!

Next up were Darth Elvis and the Imperials.  Yes, a Star Wars themed Elvis tribute act.  What more could anyone want?  Sheer magic.  Their songs consisted of Star Wars re-workings of Elvis hits, plus a groovy rendition of that Rebo Band classic, Lapti Nek.  Now there’s a song I never thought I’d ever hear played live.  The spectacle of numerous Star Wars characters rocking out together on stage was something to behold.  This band should be intergalactic!

That was about it for us, as we headed off to get some rest for Day 2.  Attica Rage played us out; would’ve loved to stay but we were wrecked.

You’ll see many pictures here of those who attended, wearing all sorts of wonderful costumes.  The hard work and imagination that went into these outfits is really exceptional. Plus, everyone was really happy to have their photo taken; there was a great fun atmosphere at the event. I’ll post more photos in the next instalment.  Please remember however – I am not a professional photographer!  The lighting was not always very good and everything was always a bit rushed….