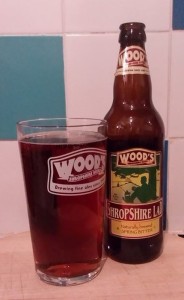 Well the sun is out, so it’s time to hop in the Virtual Hot Tub and enjoy a nice, refreshing beer.  Plus with all that travelling to conventions and whatnot, I think a nice chill in the tub is very much called for.

This weeks tipple is the result of a gift I received not too long ago – two bottles of beer from Wood’s Brewery in Shropshire.  I received a very nice gift pack with two ales and a rather cool glass.

First up was Shropshire Lad, described as a “Spring bitter”.  It was a glorious copper colour and held a slight sweet taste to contrast with the bitter.  This is the flagship beer of the brewery, and it’s easy to see why.  Brewed at 4.8% alc. vol., Shropshire Lad was jovial, full of character and also laid back. 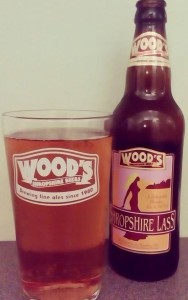 The other beer in the pack was Shropshire Lass, a golden pale ale counterpart to the previous drink.  Described as a “blonde stunner”, this 4.1% alc. vol. beer was light and refreshing, together with a warm and welcoming flavour with a slight citrus taste.

I really enjoyed both beers, no favourites – and highly recommend them.  Check out the website below for information on where to buy.