It was time for another fun family day out in Wrexham, for Wales Comic Con.  Time to charge up the landspeeder and head over for more sci-fi shenanigans at Glyndwr University…

Following on from the success of last year’s events, Wales Comic Con is now spread over a whole weekend.  This was a good move, as there seemed to be less crowds this year  – without losing any of the welcoming spirit.

Tell your lad hes been a naughty boy! 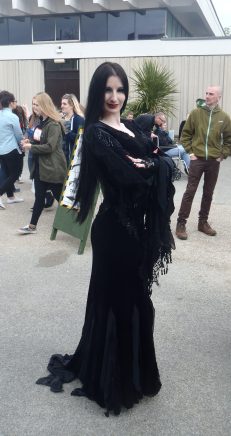 We headed over on the Sunday, and though the weather wasn’t as amazing as this time last year, it still managed to remain fairly decent.  No matter, there were plenty of things to see and do, both inside and out, at the Con.

Although the guests weren’t of particular interest to me personally, it was nice to see a good amount of celebs in attendance.  The celeb who I was most thrilled to see was none other than Justin Lee Collins, who I didn’t know was there.  Most of the females in the vicinity seemed to be very taken with Jason “Aquaman” Momoa…

The amount of merchandise on sale appeared to be greater than previous, which was a bonus.  We splashed out on a few items, namely a cuddly Harley Quinn doll, a Walking Dead mug and some (delicious) peanut butter fudge.

The highlight, as ever, were the Cosplayers – dressed as all manner of characters from every facet of sci-fi, fantasy, and horror that you could imagine.  Yet again, the ingenuity and creativity on display was astonishing.  I took load of photos, which you can see here.  Despite my best camera having gone to the great Jessops in the sky, they mostly turned out OK.

Princesses and a scoundrel 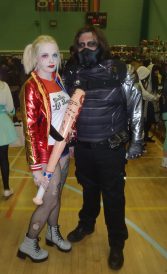 So a big thank you to everyone who posed for a photo.  Everyone was very friendly and happy to be photographed – they were all super stars!

Speaking of Cosplay, my daughter Eloise was dressed as Princess Leia again and looked fantastic!  Quite a few people commented how great she looked, and asked for her photo! 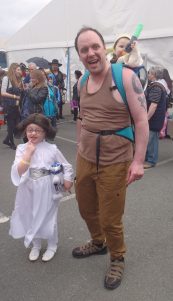 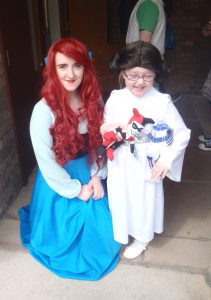 Anarchy at the Con

This was also the first time I tentatively dipped my toes in the water of costuming at an event also.  After having been chided by various people at Sci Fi Weekender for not dressing as Tony Stark, I decided to give it a go.  I wore the same Black Sabbath that Tony wears in the film, and relied on my beard for the rest.  It was OK and a couple of people knew who I was supposed to be.  No one asked for my picture though…

I should also say that the staff seemed to be very helpful and efficient also.

All in all a grand day out for the Platinum Al family.  Looking forward to more later in the year!

It turns out that I have loads of half decent photos from Wales Comic Con.  Stay tuned for part 2 soon! 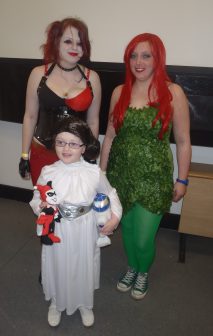 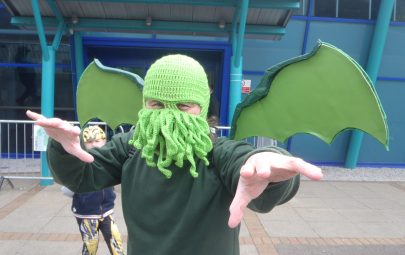