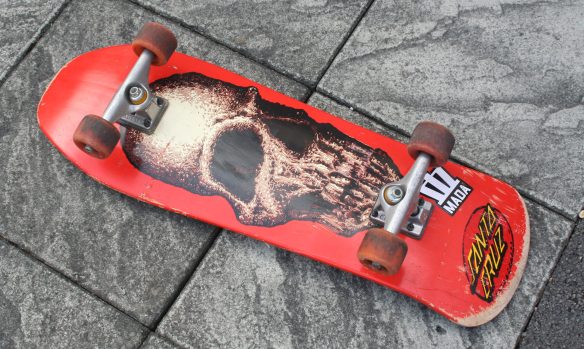 A few years ago, I had an urge to get me an old school set up.  I already had my everyday double kick street machine, but I felt I needed something that reminded me of my skateboarding youth in the 1980s.

This Santa Cruz Street Creep was the answer.

I remembered the Street Creep from those halcyon days.  I never owned one at the time, though I did own other Santa Cruz decks (see the blog about my Rob Roskopp deck, for one).  The Street Creep was a very cool shape and a cool graphic.

Luckily for me, numerous skateboard companies have been re-issuing the old shapes as collectors pieces.  I picked this re-issue up fairly easily.  I fitted it with some new, wide Independent trucks and some old Santa Cruz Slime Balls wheels and it was ready to go.

The wheels were rescued from an old relic of a board that was passed to me a few years back.  I always wanted some Slime Balls, finally I got a set! 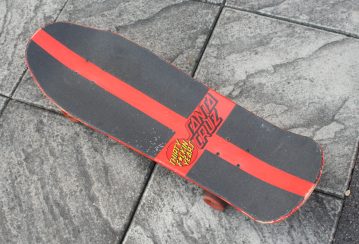 The result is a rad skateboard that brings back loads of memories.  The shape is great, though it takes some getting used to after skating shorter, thinner boards for ages.  It’s a fantastic skateboard for blasting a few old tricks on – I find no-complys and some boneless manoeuvres easier on this set up.

With the big, softer Slime Balls attached, this board is great for carving up some of my favourite banked skate spots.  In particular, there’s a messy old “bowl” I like to skate – tarnished with grit and stones, but very skateable with this monster.

Plus there’s the graphic – if you’re an old 80’s skate hound like me, it’s all about the skulls!  Check out the close up the graphic and you’ll see dozens of smaller skulls and faces within the image.

Skateboards are a thing of beauty; this Street Creep looks and rides superb. 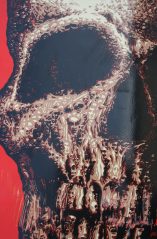 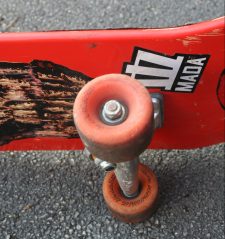