I can’t remember when I was first aware of Teenage Mutant Ninja Turtles, but as a big comic book reader in the 1980s it was kind of inevitable that we’d cross paths.  Cleverly playing with some popular comic tropes, Kevin Eastman and Peter Laird created a pop culture phenomenon almost by accident.

I do remember the Ninja Turtles and their creators getting a shout out in the “thank you” list of the “Among the Living” album by thrash metal kings Anthrax.  The book seemed quirky and original, it’s popularity boosted with a reputation for genuinely great writing and art. 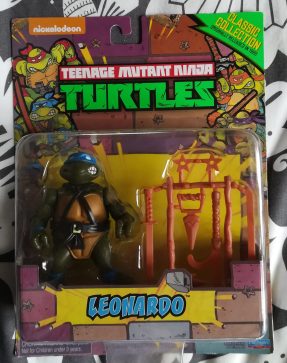 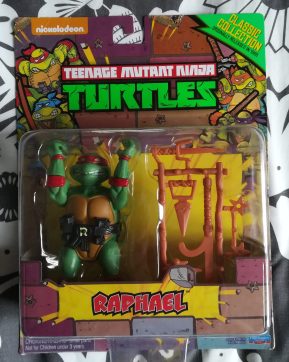 Next came the cartoon, a couple of years later.  This was the turtles tidied up for a younger audience and it became a massive hit.  I was about 17 at the time (!), but enjoyed watching the cartoon occasionally as a bit of tongue in cheek fun.  I was being ironic, honest.

The toys that were made at the time were very cool; for the era they seemed very well designed and super detailed.  I was far too old for the action figures, but secretly coveted them from afar.

Eventually I picked up the figure of my favourite turtle, Michaelangelo.  He must have been on sale somewhere post turtles craze,’cos this would’ve been in my student days and thus, extremely poor.  He was a perfect ironic, “look how wacky I am” student possession.

Sadly, Mikey disappeared – I know not where – and once again, I was completely turtle-less.

Until a couple of years ago, when taking my daughter on one of her last trips to Toys R Us, before it closed for good.  They had on sale re-issued turtles, exactly like the old versions I loved, and they were cheap (ish).

I replaced Michaelangelo there and then, and over the next few days was so eager to complete a collection of all four turtles that I returned to buy others.  With a little bit of toy spotting help from my old pal Adam, I was soon in business with a full team of Teenage Mutant Ninja Turtles.

At the moment, I only have the full group of Leonardo, Donatello, Michaelangelo and Raphael.  It would be great to have Splinter, Shredder and more one day, but I doubt they’ll turn up cheap.

All four are still Mint in Box.  How long can I resist the urge to release the guys from their blister pack prisons?  Surely one night I’ll have had a little bit too much to drink, and decide to tear that plastic from the backing card…

What do you think readers?  Should the Teenage Mutant Ninja Turtles stay in their boxes, or should I open them up?