Dracula vs Fu Manchu!  The Creature from the Black Lagoon vs Godzilla!  The Wolfman vs Man Eating Plant!  Just a few of the fun confrontations that can occur with this classic Horror Top Trumps game!

Top Trumps is a card game, where the statistics of one card are pitted against another.  Surely you’ve played it?  The most usual sets were cars, aeroplanes or football teams.  There were occasionally sets that were a little more unusual, such as these Horror themed cards.

There were two Horror packs to collect.  Each card featured a different monster and broke down their stats to Physical Strength, Fear Factor, Killing Power and Horror Rating.  All the legendary monsters were present, plus a few others that were more obscure.  So in addition to the characters mentioned above, there were also the Mummy, Frankenstein’s monster, King Kong, the Thing and more.

As a monster obsessed kid, it was a great way to feed my obsessive thirst for knowledge.  I didn’t just play these cards repeatedly, I also studied each one.  For the majority of monsters, I had no idea what film there were from.  Over the years, and thanks to some old horror books I’ve collected, I’ve recognised the characters from published film stills.

Interestingly, though, the character names are quite random.  For example, the card named “Phantom of the Opera” is actually a picture of Dr Phibes.  Similarly, “The Freak” is actually the Reptile from the Hammer movie of the same name.

The artwork on the cards was often quite gruesome also.  There was a rumour I heard for many years that the Horror cards were banned in the early 80’s due to the graphic images.  I doubt that was the case, though illustrations for cards such as The Fiend and Venusian Death Cell were quite bloody.

I’m lucky enough to have collected both Horror Top Trump packs when I was a kid, and I’ve still got them.  They’re not mint condition, and I only have the title card for the second pack.  Never the less, they’re still played with, and bring a gory thrill… 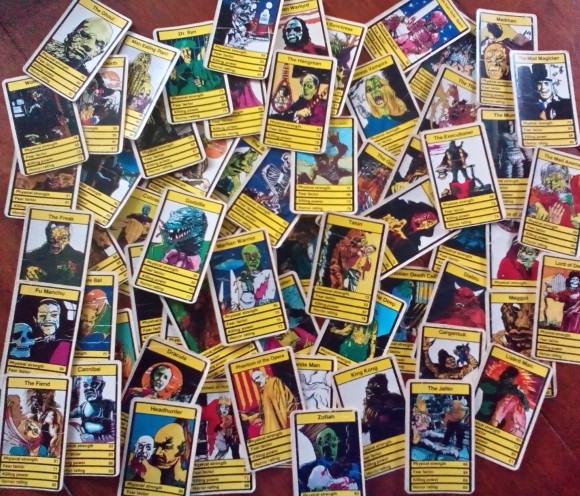