I couldn’t have another Halloween Horror Fest without honouring the wonderful Sir Christopher Lee, who sadly died earlier this year.  So it’s time for another Hammer horror classic with Dracula: Prince of Darkness!

This was the first time that Lee reprised the role of the Count since his performance in the legendary Dracula (or Horror of Dracula in the US) in 1958.  Bizarrely, this time Dracula is silent throughout – not uttering a single word – as Lee claimed he refused to speak the atrocious dialogue.

Following on from the previous film some years later, we encounter four British travellers who wind up at Castle Dracula, despite warnings against going there.  The travellers face some strange goings on, leading ultimately to the true purpose of their welcome at the castle – being used as sacrifice to resurrect the Count. 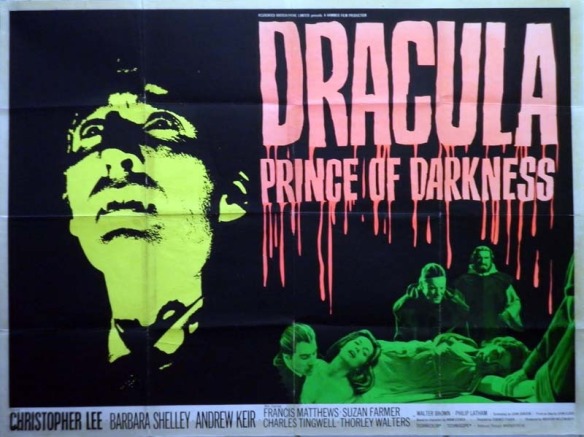 It takes a while to get to the key scene of murder and resurrection, though there are several creepy elements in the lead up to it.  This revival of Dracula is quite a blood thirsty and shocking scene, even now.

The rest of the movie sees our heroes trying to evade the vampire whilst finding refuge at a monastery, where Father Sandor (a superb Andrew Keir) steadfastly defends against the Count.

Dracula: Prince of Darkness is not without it’s faults, but it does posses some witty ideas and a few sly winks to the original source novel.  Add in some terrific performances and the result is Hammer horror defined; it’s worth seeing to witness these traits before they became a cliché.  All the great elements of the famous studio are here – including the greatest Dracula of them all.

You can read my full tribute to Sir Christopher Lee here.