We decided to watch a spooky movie as a family, and The Addams Family was a perfect choice.  In this movie version of the famous cartoon/television show, Uncle Fester (Christopher Lloyd) has been missing for many years, but returns from the unknown to a warm welcome from his family.  But is Fester all he seems? 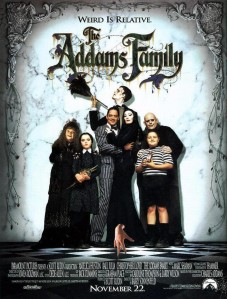 This is another film that I wasn’t too fussed on when I saw it originally, way back in 1991.  Oh, that makes me feel old…

But returning to the movie all these years later I found I enjoyed it much more.  The look and feel of the family and their house is, for the most part, spot on.  Their peculiar interests and characters are suitably amusing, particularly in the case of Fester and Gomez (Raul Julia).  The only weak link is Anjelica Huston, who never cut it for me as Morticia – she has none of the allure of Carolyn Jones in the old TV show.

Stealing every scene however is Wednesday Addams, played by a very young Christina Ricci.  She gets her fair share of memorable lines and carries each of them off well.

The Addams Family is full of ghoulish laughs and was a big hit in our household.  Ideal for Halloween family fun.

Pride and Prejudice and Zombies (2016)

Yes, that is indeed the title of this film.  And yes, it is indeed loosely based on the Jane Austen novel.  Unlike many purists, the idea of these type of mash up movies (see also Abraham Lincoln, Vampire Slayer – and others) appeals to me greatly.  I’m more than happy to mercilessly disregard any sense of genre loyalty for the sake of entertainment.

I should be honest and admit that I have never read Pride and Prejudice.  Nor have I seen any of the numerous film and television adaptations.  I did study Austen’s Emma for English A Level – I found it incredibly dull.

In my defence though I’ll say that I also read Jane Eyre by Charlotte Bronte – which I loved and still rate as one of my favourite books.  So I can’t be a complete philistine, surely?

Anyway, back to the film.  England has fallen amidst a zombie apocalypse.  The ladies and gentlemen go about their business in their big stately homes much as one would expect, though in this version they’re now trained in deadly martial arts for self defence.

The plot follows the heroine, a tough Elizabeth Bennet (Lily James) and her sisters as they navigate not only the romance of the era, but a plague of zombies too.  Mr Darcy (Sam Riley) is played as a battle hardened zombie slayer, with some brilliant innovative devices for detecting the undead.

Although I’m not familiar with the source material, the dialogue and narrative seems authentic enough.  Plus the zombie element is woven in very nicely, providing a quirky additional element to the proceedings.

The second half of the film lagged a little as the characters seem to spend too much time untangling their romantic affairs and misunderstandings (just like in the unbearable Emma).  But there were a few laughs (great performance from Matt Smith as Parson Collins) and some tension in the finale to make it all worthwhile.

Put aside any prejudice you may hold yourself and give Pride and Prejudice and Zombies a chance.  Keep an open mind and it’s great fun.

So there we go – another year of Halloween Horror Fest is over.  Do not fear – there are many more horror DVDs in my collection for next year.

Fang you for joining me for Halloween Horror Fest 2016!