Here we go with another month of as many horror films as I can fit in, on the run up to Halloween.  Both myself and Mrs Platinum Al take turns top pick a spooky movie to entertain us; I then write these here mini movie reviews.

Recently Mrs Platinum Al and I went to see the new version of It in the cinema.  I was familiar with the story but wasn’t really expecting anything really exciting.  How wrong I was: the remake of It is superb fun from start to finish.

So it’s a bit of a no-brainer that the first film of this years Halloween Horror Fest would be the original 1990 version.  But how would it stack up compared to the revised film?

It is based on a Stephen king novel, in which a nondescript North American town is plagued by a series of child murders.  A gang of misfit kids, labelling themselves the Loser’s Club, find themselves terrorised by the evil entity that is responsible.  Preying on their deepest fears, It threatens to kill them all, until the Losers can unite and defeat the creature. 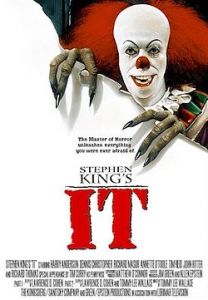 Years later, the grown up gang are brought back together when it becomes obvious that It has returned.  This time they must destroy it once and for all…

The old film (actually a TV mini series, if you want to be picky) stands up surprisingly well against the new.  The new film is superb, and resplendent with the latest in special effects technology.  However the more primitive effects don’t harm the original at all, it still works thanks to great performances from all.  The 1990 movie succeeds because, like the later film, it brings the characters to the fore.  The Losers Club – whether kids or adults – are all interesting people that the audience can root for.

Of course the star of the show is the phenomenal Tim Curry, as Pennywise the clown.  Creepy and sinister one minute, Curry transforms into unhinged malevolence with startling ease.  Pennywise is evil incarnate and brilliantly portrayed here.

But who is the best?  Tim Curry or the new film’s Pennywise, played by Bill Skarsgard?  I’ll leave that for you to decide…