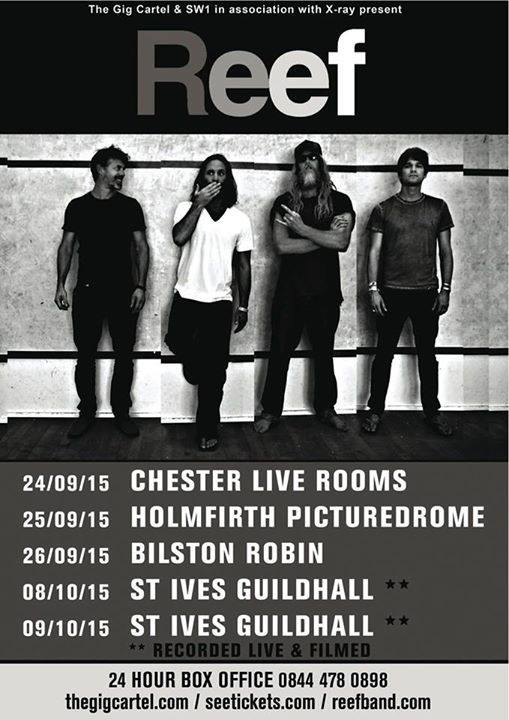 One thing I’ll tell you about Reef: they’ve got the tallest fans ever.  I’m only five foot eight on a good day, so I was dwarfed by this crowd.  I have no idea how come Reef can command such an audience of giants.  Perhaps there’s something mystical in the music of these West Country rock wizards that attracts the giants from the hills, mesmerised.

Tonight I managed to see the entire support set, which made a nice change.  Better time management on my part.  And I’m glad I did, as opening act Tax The Heat were great.  Splendidly dressed in sharp suits, they cranked out some classic rock riffs and looked to be having a hell of a good time.  Definitely good enough to see headline their own gig, Tax The Heat compliment old school rocking chops with a modern sheen.

I’d been hoping that Reef would turn up in my neck of the woods for some time.  Previously I had witnessed part of their set at Wakestock some years ago, unfortunately having to leave early.  That wasn’t enough for me – I felt I was due the full Reef pie, with all the trimmings.

There was quite a good time vibe amongst the crowd – you could feel the anticipation in the Live Rooms.  Reef entered the stage in a relaxed and unassuming manner, though they immediately unleashed some magical sounds with opener “Higher Vibration”.  Conner MacLeod was on vocals, doing a top quality job as Gary Stringer.  To his right is new(ish) guitarist Jesse Wood, who fits in perfectly: he’s confident yet laid back; masterful playing and not overly flamboyant.

A great deal of the set was culled, unsurprisingly, from Reef’s hugely popular second album, Glow.  So we get gems such as “Consideration”, “Come Back Brighter”, “Place Your Hands” (of course) and my personal favourite – the absolutely megalithic stomp of “I Would Have Left You”.  Songs that sum up Reef’s ability to meld Zeppelin sized riffery with tuneful, tender moments.

There’s also some songs from Rides and the sole song from debut album Replenish, “Naked”.  Jack Bessant, looking like Rob Zombie’s Dad but much, much cooler – unleashed another monstrous bass line for “New Bird”.  It’s no mere greatest hits set though, as Reef throw in some well placed new material.  The new songs are quality stuff, sounding like old time soul classics played by seventies blues rock behemoths.  Drummer Dominic Greensmith looks to be having a great time as he smashes his kit into a parallel dimension.

My only complaint is that there’s nothing from their fourth album, Getaway.  I love that album, it’s a real forgotten masterpiece.  It would’ve been great to hear “Set the Record Straight” or “All I Want”, a song that’s so good it brings a tear to my eye every time.

I always wondered how Reef got lumbered in with the whole Britpop thing.  To me, their music is classic old school 1970’s British ROCK, with a nice spoonful of laid back soul.  They put on a great, relaxed and yet commanding show – full of the warmth of the last days of summer.  A great atmosphere with songs that climb to Gandalf sized epicness.  And I guess that’s how you tame the giants.