I can’t believe this film is nearly ten years old.  It seems like only yesterday I saw Zombieland in the cinema.  This movie is a horror comedy, set in a post apocalyptic America over-run with zombies.  And it’s brilliant.

We begin with shy, nerdy student Columbus (Jesse Eisenberg), who is trying to make his way home to Columbus, Ohio to see if his parents are still alive.  He has developed a series of rules to stay alive such as “Beware of bathrooms” – thus far, these guides have proven solid. 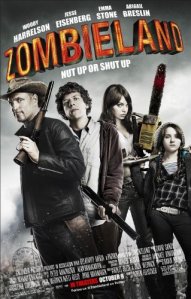 These two then meet up with two sisters, Wichita (Emma Stone) and Little Rock (Abigail Breslin), who are on their way to a California amusement park which is supposedly zombie free.

On the way there are several adventures, not least a surprise encounter with a legendary Hollywood star.  And zombies, of course.  Lots of zombies.

Zombieland is really well put together, and gets better with repeated viewings.  There’s  a lot of subtle humour that might not be obvious at first.  There are plenty of big obvious laughs too, of course, amongst nice pop culture references.

There are some jumpy scares, and a fair dose of tension, but this film is mainly all about the laughs, with some charming moments too.  If you like Shaun of the Dead, you’ll probably like Zombie land too.  But for my money, I prefer Zombieland.

Plus, Emma Stone is a total babe.  Thank you.