Well Halloween 2018 is over, sadly.  But there are a few other movies I’ve watched in October as part of my Horror Fest, so here’s a quick overview of them.  I promise to keep this short and sweet…

Is this even a horror movie?  I consulted the oracle of all things frightful, my old Horror Top Trumps, and YES – Fu Manchu is in there.  If he’s in that card pack then this counts as horror, as far as I’m concerned. 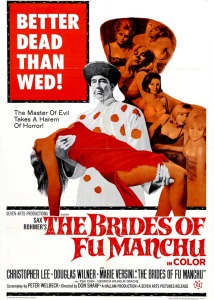 Having said that, The Brides of Fu Manchu is more Indiana Jones style adventure than scary movie, despite some gruesome elements.

Fu Manchu is played by Christopher Lee (in make-up, the sort of Hollywood white washing that would quite rightly cause uproar nowadays).  The evil criminal mastermind is kidnapping the daughters of prominent scientists, to bribe them into helping him create a death ray.  It’s up to Scotland Yard’s Nayland Smith (Douglas Wilmer) to stop him.

The Brides of Fu Manchu is terribly dated.  But if we can all agree to be adults and appreciate that this film was made in another age, reflecting views of an even older age, then it’s quite a rip-roaring yarn.  Take it with a pinch of salt and watch it with a wary eye.

It’s Hammer, but it’s not really horror!  The Viking Queen is (very) loosely based on the story of Boudica in Roman Britain.

Here we have the tale of British Queen Salina (played by Carita) and nice Roman leader Justinian (Don Murray) who plan on creating a fair land for all.  And they fall in love.  Predictably, there are grumps on both Briton and Roman sides that conspire to make a right old mess of things for the romantic couple.

On first viewing, I found the historical inaccuracies too much to swallow.  Further viewings have allowed my expectations to be lowered and I’ve begun to enjoy it more.  Not for the history buffs, but The Viking Queen is an enjoyable tale (with some nasty gory bits to remind us it is Hammer, after all).

It’s Jaws with Spiders!  New doctor in town Jeff Daniels is an arachnophobe, who just happens to move his family to a new town that’s about to become deadly spider central. 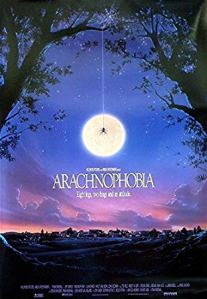 I saw this film in the cinema and don’t think I’ve ever watched it again since.  So I was surprised that it was actually still quite good fun, with the sort of scares that force the viewer to move away from any possible spider hiding places in the living room.

Good fun and quite gruesome in places, it’s too scary for young children (as I found out), although completely obvious plot-wise.  Disconnect brain and enjoy.

Much more suitable for your younger monsters, this animated feature from Dreamworks manages to entertain and pay homage to classic B-movie monsters from the past.

Susan Murphy (voiced by Reese Witherspoon) is hit by a meteorite that mutates her into a giant, Attack of the 50 Foot Woman character.  She’s whisked off to a top secret military installation and holed up with some other monstrous types.  Eventually the creatures are brought out of confinement to defend earth from an alien invasion.

Monsters vs. Aliens features a great voice cast including Hugh Laurie (a mad scientist/The Fly-like Dr Cockroach), Seth Rogen (as The Blob-like B.O.B.), Will Arnett (as the Missing Link, a Creature from the Black Lagoon specimen) and Kiefer Sutherland as the General in charge.  Rogen in particular is hilarious.

Lots of fun, great animation and a nice message if that’s your thing.  Monster vs. Aliens is a winner.