Prepare yourself, loyal reader – for one of the scariest, most horrifying films ever made.  A movie that can incite such fear that you will never stay in a log cabin – or trailer home – ever again.  What is this master piece of horror, you ask?  Why, it’s the classic known as The Legend of Boggy Creek!

Filmed in a semi-documentary style, The Legend of Boggy Creek investigates the strange case of a sasquatch type creature in Fouke, Arkansas.  Some local residents actually appear, recounting some of the creepy first hand experiences that they’ve had or heard about the Fouke Monster.

Contrasting visuals of the idyllic southern swampland with the threat of the unknown, waiting in the secluded creek – creates an unusual and gripping story.  Watching it, I felt the small town atmosphere and could imagine the loneliness of the locals – threatened by this mysterious creature.

I first saw The Legend of Boggy Creek when I was around nine years old, during a season of BBC2 “monster movies” that also featured King Kong and Mighty Joe Young.  Such was my fear that I had to change channel and watch something else.  I never saw the film all the way through till I tracked down a DVD copy some twenty years ago. 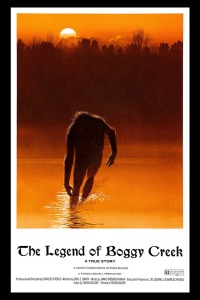 This movie still frightens the life out of me, even now.  There’s something about the isolated homes and strange, dark woods that still chills me to this day.

The final sequence of the creature menacing a local family in their remote house at night, is one of the most frightening things I’ve ever seen.

Of course, other viewers haven’t been so impressed.  Mrs Platinum Al considers this movie a load of old nonsense and not scary in the slightest.  Maybe I’m just reminded of being a terrified child when I watch The Legend of Boggy Creek now.

Whatever the cause, I know that this mysterious monster tale still has the power to absolutely chill me to the bone.  I wouldn’t watch it on my own at night, ever.  Not for any money.  Check out The Legend of Boggy Creek for yourself.  You’ll probably think it’s a hilariously cheap B-movie with no scares, too.

Or you might witness one of the most awesomely eerie, cult cinematic terrors ever.