Hammer’s only venture into lycanthrope-based horror in the movies, The Curse of the Werewolf is a great example of the studio doing what they do best.  There’s no Pete or Chris, but we do get an early chance for Oliver Reed to demonstrate his talent.

Apparently the movie was based on a book called “The Werewolf of Paris”; the location shifted to Spain when a planned film about the Spanish Inquisition had to be abandoned – and the Spanish sets were forced onto this production. 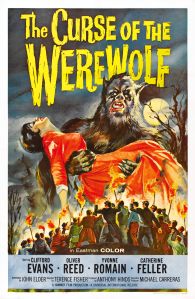 Reed plays Leon, who the audience learns has had a troubled upbringing.  Born on Christmas Day and conceived from a rape, Leon is cursed to become a werewolf.  With love and comfort, his curse is kept under control.  He falls for his employers daughter, who is engaged to another man – and soon Leon’s hidden wolf is out of control.

The Curse of the Werewolf is something of a gem in Hammer’s crown.  The story has tension and drama courtesy of Director, Terence Fisher – and the special effects are adequate for the time.  Reed is engaging as Leon, inviting our sympathy though the audience realises he is doomed.

The result is a monster movie that’s both entertaining and moving, with a depth not often witnessed in a Hammer horror.

You can’t beat a bit of Stephen King, and Misery is one of his best – the book is great, the film is a masterful adaptation.

Paul Sheldon (James Caan) is a best selling novelist, who crashes his car on a snowy Colorado road.  He’s rescued and nursed by Annie Wilkes (Kathy Bates), who claims to be Paul’s number one fan.  But Wilkes discovers that Sheldon has killed off her beloved character, Misery, and his experience goes downhill faster than his car did. 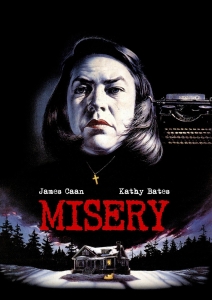 Trapped in Annie’s house and confined to a wheelchair, how will Paul escape before Annie’s descent into murderous madness is complete?

Directed by Rob Reiner, Misery has tension and pace enough to keep anyone on the edge of their seat.  Caan is excellent; Bates is on Oscar winning form as the disturbed woman switching from kindly to evil in a heartbeat.

There’s nothing supernatural in Misery, but this story is certainly horrific.