More bad taste baubles for your entertainment! Last year I displayed some of the wonderfully strange and tacky Christmas tree baubles that I’ve acquired. They can be found hanging from the branches of our festive tree. As I’ve added a couple more to the collection, I thought I’d share them here. for your enjoyment.

Now, something that has distressed me this year, whilst perusing the delights of Twitter, is people referring to these decorations as “ball balls” or even “baule baules”. I know, disgraceful isn’t it? No wonder we’re in the mess we’re in.

Anyway, I hope you like these ball balls, may they bring some yuletide cheer to what is a tough situation for us all.

Below you will see:

And with that, all I can say is Merry Christmas to all of my readers. Enjoy this festive tat, and keep coming back to Platinum Al’s Virtual Hot Tub for more fun next year! 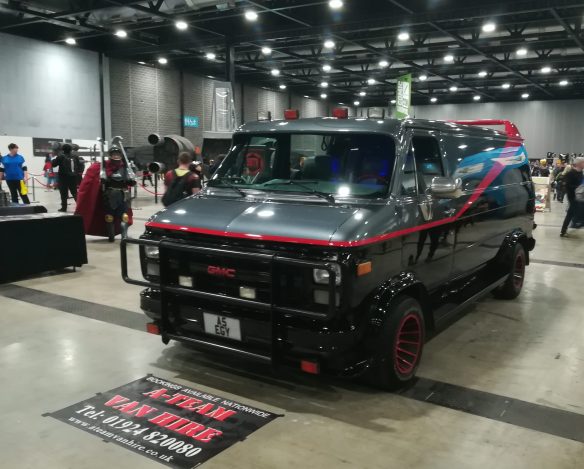 Welcome back to my over view of Liverpool Comic Con.  Last time, I shared photos of some of the amazing Cosplay outfits to be seen at the event.  This time, I thought I’d share some pics of the eye-popping props on display.

The selection of display items at this convention was another selling point, with plenty to view.

Star of the show was a full scale X-Wing Fighter, which dominated the exhibition hall on entry.  It was spectacular: the size and detail both being extremely impressive.  Even though, as I stated previously, it was a Disney Star Wars ship and not the version from the classic trilogy, it was pretty cool. 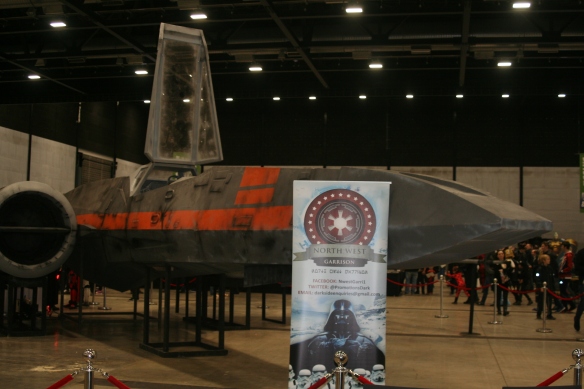 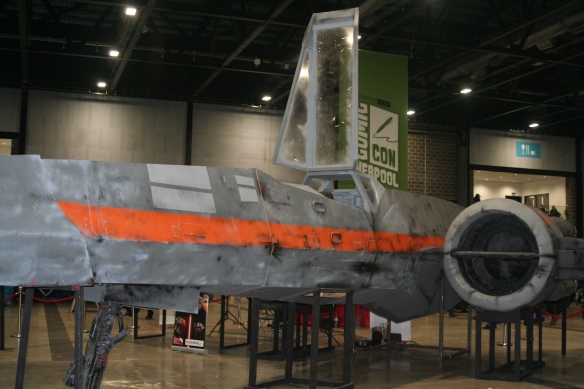 Just imagine how ace it would’ve been if it was a full scale Incom T-65  X-Wing Fighter, as flown by Luke in Episode IV?!  If only.

There were several vehicles from film and TV also, including BA’s van from The A-Team and KITT from Knight Rider.  Both awesome.

I’ve seen a Back to the Future DeLorean before, but it’s always a treat.  This one was, of course, tricked out with other props from the film too – like Marty’s hover board. 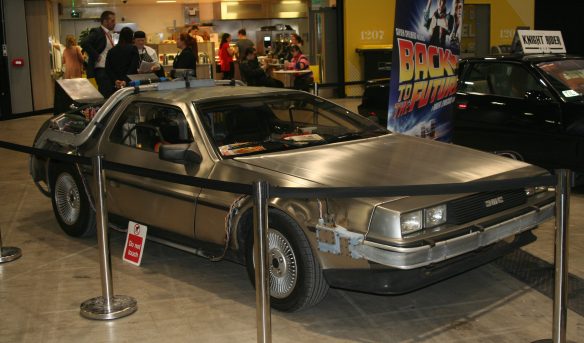 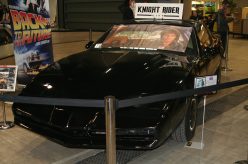 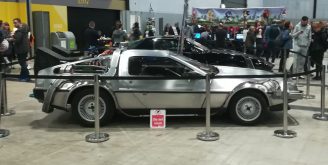 In addition to vehicles, I also saw costumes from Battlestar Galactica and Buck Rogers in the 25th Century – two Glen A Larson classics from my childhood.  I was pretty stoked to witness these first hand, being a huge fan of both television programmes.

Not to mention there was a ton of Star Wars costumes, helmets and gadgets that I didn’t get round to photographing.  I did take a pic of my all time hero R2 D2 though (and one of Johnny 5 from Short Circuit, another star of the day). 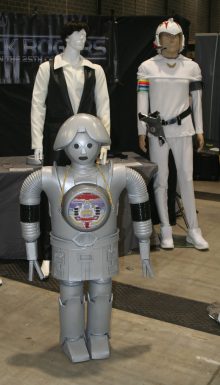 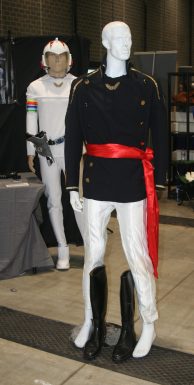 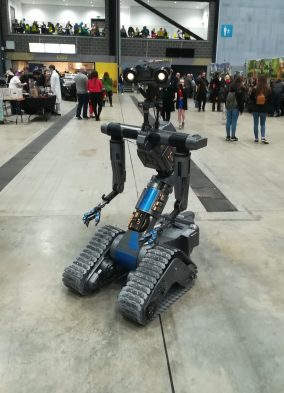 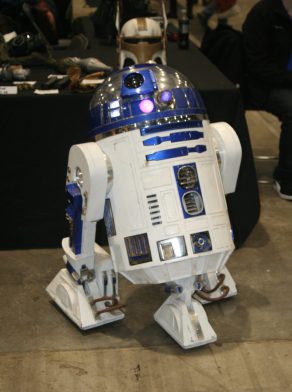 I assume all the props I saw were reproductions rather than actual items used in filming (I could be wrong).  However it was still a thrill to see them.  If only I could’ve actually sat in the vehicles… 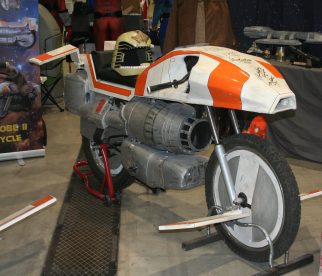 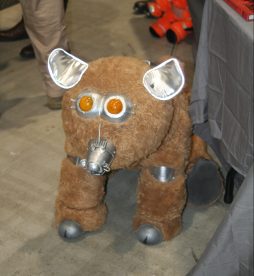 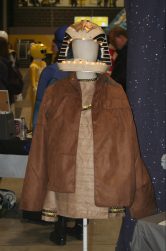 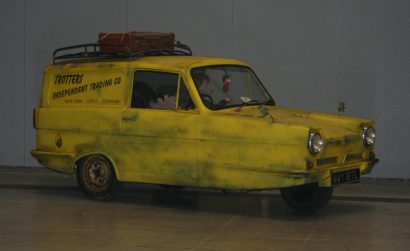 Science fiction action figures are the basis for any good toy collection.  My collection of Star Wars toys goes right back to the late 1970’s, and I’ll get round to posting some pictures of those in the future.  Oh yes, it shall happen.  Any requests, let me know.

In the meantime, I thought I’d showcase some alternative items that have been lurking around for over thirty years.  These figures aren’t always mint condition, and rarely have all the accessories they came boxed with.  And there are certainly no boxes (or cards) now, as they were all actually played with…

These 3 3/4″ action figures were produced by Mattel in the late 1970’s, to coincide with the release of the television show.  They were obviously aiming to emulate the phenomenal success of Kenner’s Star Wars figures. 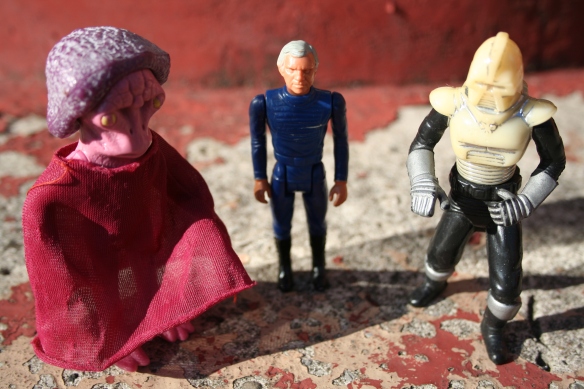 On the left of the photo is the Imperious Leader figure, all in good condition – but then other than the cloak, he didn’t have any accessories.  In the middle is Commander Adama, who bears a slight resemblance to Lorne Greene.  Unfortunately Adama’s cloak and gun are long gone.  The Cylon Centurion is the coolest figure here, though mine has lost a lot of his silver finish.  The laser gun is around however, though I didn’t use it for the picture.  The Cylon was my first Battlestar Galactica toy, a present from my Dad.

There were some other cool figures produced in this line, in particular the Ovion and Daggit were great.  Unfortunately I never owned either.  I would’ve also loved a Lt. Starbuck, but I never saw one.  Ever.

Great show, Battlestar Galactica – I love the original and the rebooted, recent version.

Disney’s The Black Hole, however, was not that great a movie.  At least not when I saw it on TV as a kid.  Maybe I should try it again, to see if I was just too young to dig it. 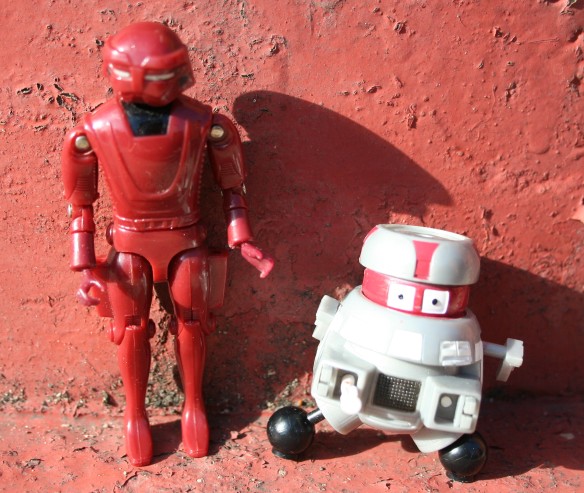 The action figures for this film, again 3 3/4″ like Star Wars figures – were multi jointed.  As a result, the human figures were rather frail.  I had a few of them, now reduced to limbless torsos.

No matter – the stars of the show were the robots, and here we have two of the best.  The Sentry Robot (left) was particularly cool, with a holster to hold his pistol.  I have the gun safe, so this one’s probably worth a load on ebay.  Note the joints which are clearly visible.

Also, we have V.I.N.CENT – a cool design for a robot.  Laser guns and big, cute eyes. 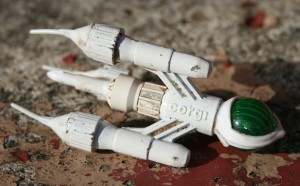 Not an action figure – this is a Corgi toy of the Liberator spaceship from BBC sci-fi serial, Blake’s 7.  You can see the Corgi stamp on the photo.  Quite a cool design for a TV spaceship.  I quite liked Blake’s 7 when I was a kid, and remember being surprised at the end…

I have lots of fond memories of finding and playing with these toys when I was young.  They’re  great souvenirs of old films, and fun times – and imagination.