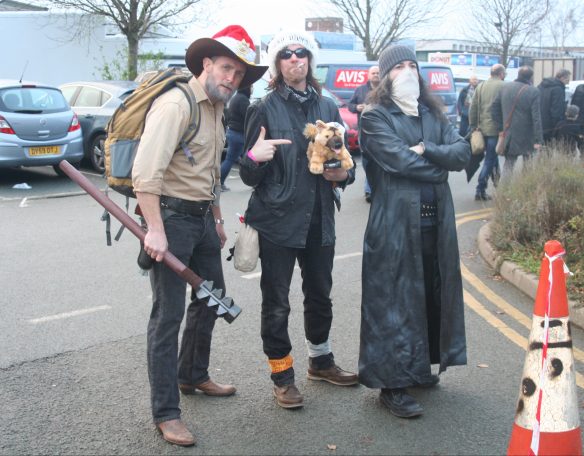 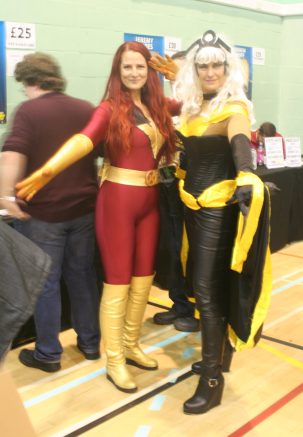 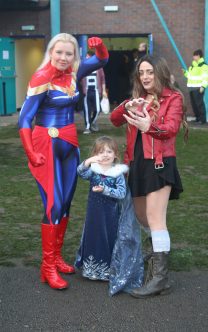 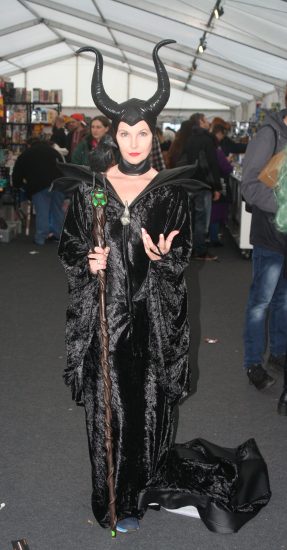 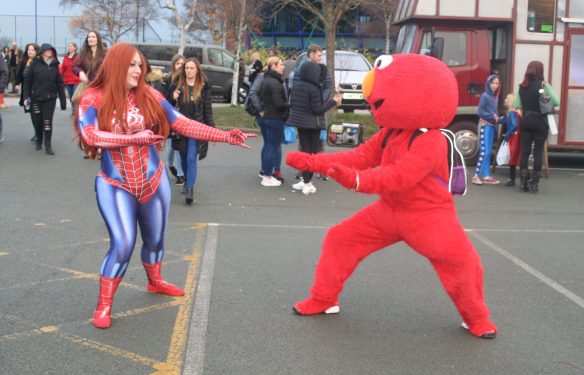 One more Comic Con for the year, to finish 2017 off in style.  It seems like I’ve done a lot of conventions recently!

I didn’t make it to Wrexham for Wales Comic Con back in April, but I’ve been there previously and it’s always a fun event.  Now expanded to run over two days, this winter edition of the Con was bigger than ever.

Most impressive was the calibre of the guests that appear here.  It’s a far more impressive line up than even the mighty NEC could muster recently.  Wrexham definitely punches above it’s weight in that category. 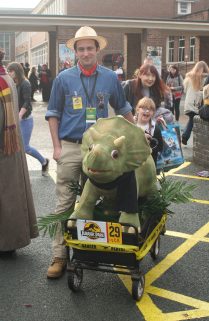 Being December, the weather was sometimes a challenge.  The Spring gathering has been lucky weather-wise, and the outside expanse has always been a fun place to hang out and take photos, meet people etc.  Cold and rain took more of a toll this time, but didn’t seem to dampen peoples spirits too much.

This event wasn’t without some criticism.  Although we had bought tickets prior, we had to queue (outside, in the rain) for about forty minutes after the doors opened to get in.

When we did get in, we marched off to the Signing Zone to find the guests from The Walking Dead (our prime reason for being there).  After scouting around the entire area, it turned out that these particular guests were in a different Signing Zone!  Notification of this passed us by completely, if it was available at all.

Despite these organisational issues that we perceived at first, things settled down and this Comic Con turned out to be a great success.

The first hit of the day was the Q&A panel featuring Scott Wilson (Hershel) and Michael Cudlitz (Abraham) from The Walking Dead.  This was really interesting, with some quality questions from the audience.  Both Scott and Michael came across really well, with amusing anecdotes and genuine appreciation for the show and it’s fans. 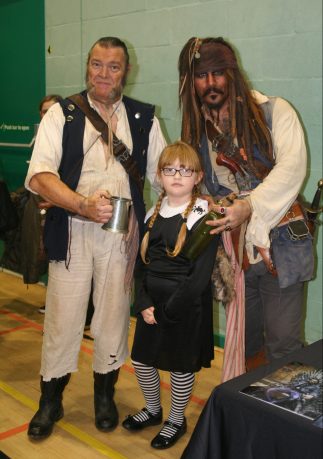 Wednesday and the pirates

We could have happily listened to these guys for much longer, but all good things come to an end and this had been unmissable.

It was then time to queue up (again!  Haha) to meet the actors from The Walking Dead.  We’re big fans in our house, in particular Mrs Platinum Al – and she was really keen to meet Michael Cudlitz.

The queue wasn’t too long or arduous, and we got to meet Mr Cudlitz and get a selfie and autographed photo.  He was very cool and gracious; he joked with fans and was very friendly.  Despite only having a short time to meet people, Michael did an excellent job of remembering names and making everyone feel very welcome.

Superb stuff, and Mrs Platinum Al’s Christmas present was now in the bag!

Talking about acquisitions, Wrexham has upped the ante with the amount of traders selling goodies.  In the past the number of dealers seemed limited (probably due to space), there were far more this time.  Good news in a wallet endangering way.

Remember those trick knives you used to find in joke shops?  Plastic, with a blade that retracted into the hilt when you “stabbed” something?  We took one as a prop for my daughter, who was dressed as Wednesday Addams.  Turned out to be a cool idea.  Michael Cudlitz, bless him, allowed Eloise to “stab” him in the head, walker killer style, to “stop him coming back”.  From the dead that is, not back to Wales.  Michael played along brilliantly – I didn’t get a photo though, curses!

With tons of guests, Q&As, memorabilia to peruse and other activities, there was plenty to see and do.

Of course there were loads of great Cosplayers at Wales Comic Con too.  I took a few photos, but the usual issues of time and the weather meant I didn’t get too many.  I’ve shared the pics here.  Unfortunately some photos didn’t turn out (as always), hopefully these shots will provide a flavour of the event. 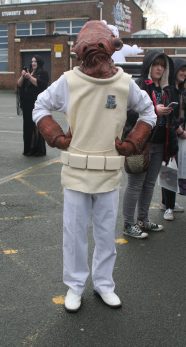 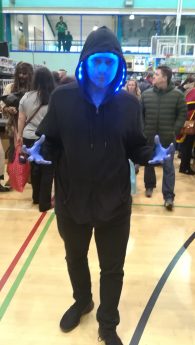 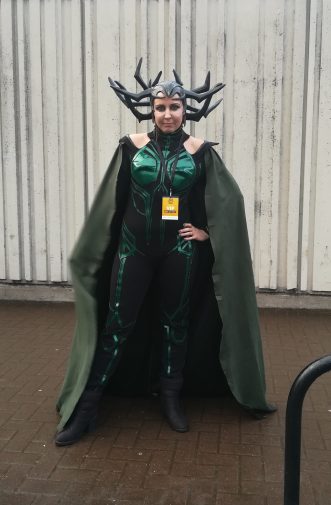 Thanks again to these amazing people, who have created fantastic costumes and let their creativity flow.  Thanks for allowing me to take pictures and more power to you!

If Wales Comic Con keeps developing as it has, then 2018 should be even bigger and better.  The fact that the organisers can entice such amazing guests is fantastic.  Let’s hope the success continues.

Here’s Part 2 of my trip to MCM Comic Con in Birmingham recently.  I took plenty of photos – far too many for one blog post – which meant that a second chapter was required!

As I said last time, there were dozens and dozens of Cosplayers at this event.  They covered characters from many different genres, be it superheroes, science fiction, fantasy and horror. 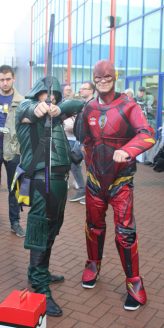 There were DC and Marvel characters; horror monsters and fantasy heroes; Disney Princesses and Star Wars characters.  You name it, you would probably have seen a costume from it.

From well known characters to the obscure; from old classics to the latest creations, there were fantastic cosplay examples of all types.  Some resembled totally authentic movie replicas and some were novel, original reinterpretations of the familiar.

Holly and the Ivy

All of the people that I photographed were, as always, incredibly gracious and happy to have their photo taken.  My thanks to every single one of them.

These photos are a tribute to the talent and craft, research and dedication that these people put into their hobby. 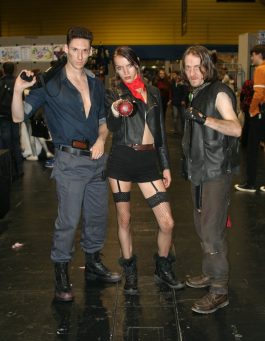 Is there anything else to say about the day?  Well I wish I had won the lottery, so I could spend a ton of money on all the goodies I saw.  Books, comics, magazines, DVDs, toys, posters – simply too much stuff to list or discuss here.

I was lucky to pick up Grandpa Munster Funko Pop for a nice cheap price (he can keep Lily Munster company on my shelf).  Unfortunately I couldn’t afford the Bride of Frankenstein Funko though – she was far too expensive.

The day was finished off nicely with the Q&A session with Anthony Daniels.  If you need me to tell you who he is, what are you doing reading this blog?!  I’ll tell you anyway.  Anthony Daniels is, of course, the golden worry pot C-3PO in all the Star Wars movies.

Mr Daniel’s Q&A was highly entertaining, covering many stories from his experiences in a galaxy far, far away.  His anecdotes were both amusing and enlightening, and his delivery kept the audience enthralled.  Sheer gold. 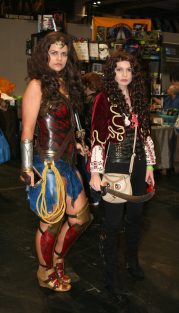 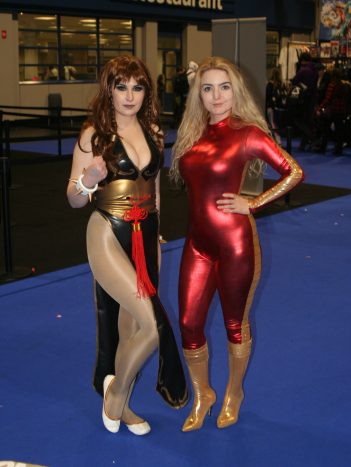 At the end, we set off on our journey home several pounds lighter (cash wise) and having had a great day out.  MCM Comic Con Birmingham is highly recommended to all.  The next one is March 2018 – hopefully see you there!