In the aftermath of the Napoleonic Wars, the land is beset by unrest and criminality. A travelling circus group are invited to the castle of Count Drago (Christopher Lee) to perform there for him. They encounter bad omens on their way, and find that the Count himself has some unusual – and deadly – hobbies.

And that’s about it, really. I watched this film to add yet another Christopher Lee performance to my stockpile – as always, he’s reliably sinister and is the best thing about Castle of the Living Dead. Donald Sutherland, in an early career role, also does a very fine job.

The film looks good in black and white, which adds a great deal to the creepy atmosphere. It’s not a fantastic film, but has enough quirky merit to be worth a watch.

Regular readers will know that I try to cover some family friendly frights during Halloween Horror Fest. This most recent Addams Family outing – and animated portrayal with some great voice talent – provided some ghoulishly great entertainment for our household.

The animation is vibrant and totally appropriate for this creepy bunch, and Charlize Theron (as Morticia), Oscar Isaac (Gomez) and Chloe Grace Moretz (Wednesday) – along with the rest of the cast – gleefully get stuck into the characters.

Wednesday Addams seems a little underused here, but the whole “be yourself, be different” message of the film is well placed and much appreciated. Far better than I was expecting, this version of The Addams Family was a spooky and kooky delight.

One more set of photos from my last visit to Memorabilia at Birmingham NEC.  I apologise – what with Christmas and all, I haven’t had chance to post these previously.

Earlier posts have showcased photos of Memorabilia punters dressed up as characters from comic books and television.  This set of shots features film based characters.  There are many more brave people dressed up at Memorabilia, far more than I’ve captured in this series of photos.  Good luck to them, I say.

I thought this was Underworld. Apparently it’s Aeon Flux? 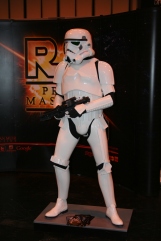 Pete and Hook getting on famously these days.

By the way – there are plenty more Star Wars photos from previous trips to Memorabilia.  Stay tuned!

Thanks to everyone at Birmingham NEC Memorabilia who posed for photos – all were very happy to do so.