How long is it since the last time I went to a Comic Con? Any Comic Con? It must be pretty much exactly two years. The pandemic ruled out mass gatherings of this type completely over that time. Now, we’re back – a long overdue visit to the wonderful city of Liverpool and it’s excellent convention.

Our only initial bad luck was arriving to find massive queues snaking back for what seemed like miles. We had purchased early bird tickets for a 9am start, however arriving on schedule at nine left us in a long line with hundreds of other punters. It took an hour before we were finally inside the exhibition centre, which wasn’t a great start.

This was a case of Queue Hard, with several sequels including Queue Hard 2: Queue Harder – and finally, Queue Hard with a Vengeance.

When we were in the building, however, all was swiftly forgiven. I think we can accept some teething troubles in getting this event back up and running. It was great to finally be indoors at a Comic Con, and we gleefully threw ourselves into the experience with enthusiasm.

There were many guests signing on the day, but none that were of particular interest to myself. So, I braved the throngs of convention goers to view the treasures on sale at the stalls, purveying all type of nerdy goodness. As always at Comic Cons, there was far too much merch for me to buy it all – though I made some fine purchases, there were oodles more a timely lottery win would’ve made mine.

I picked up a couple of Star Wars The Vintage Collection figures that I needed, and a Mego Wolfman action figure that I couldn’t resist. Plus, the Christmas shopping commenced with some unusual items I wouldn’t have been able to pick up elsewhere. The only disappointment was a total lack of ReAction figures.

Of course, the main highlight of the day was the varied and spectacular costumes worn the attendees. Cosplay was alive and well, which was great to see. Hopefully these photos will give you some idea of the skill and splendour that was on show.

Despite a dodgy start, Liverpool Comic Con was a great day out. We came, we saw, we took photos and bought tat – a fine time was had by all. I’d recommend this convention as one to visit, and I’ll definitely be back.

Have a look at the Liverpool Comic Con webnet here.

I’m lucky to be old enough to have seen the first Star Wars film – Episode IV: A New Hope as it’s now known – back when it was first released.  I was five years old and the film was a sensation with everyone I knew in school.  It’s very hard to explain just how big a deal Star Wars was to us back then: absolutely everyone was captivated by it, and I was no exception.

Back then, we were a good few years away from video players and there was no way to view the film repeatedly.  There were stories of teenagers who saw the film twenty times at the cinema, but that wasn’t going to work for a tiny kid my age.

So other than the Marvel UK comic, the only way to relive the movie that I loved was with Kenner Star Wars figures. 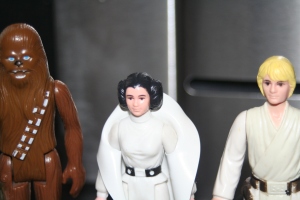 I can remember first seeing the toys and being fascinated by them.  They looked really cool – we’d never really had action figures of this size, and straight out of a movie, like this before.  I was desperate to get R2-D2.  Just R2, if I couldn’t get any of the others.

After a long while I managed to persuade my parents to buy me an R2-D2 toy.  I can still recall seeing the figure, on the card, in the shop window.  There was a cycle and toy shop on the high street in Connah’s Quay in those days, known to us as the Bike Stores, which was the place to get your fix of 1970’s toy goodness.

So I got R2 and I was set.  Except it didn’t stop there.  I started collecting all the figures, and as many of the spaceships and playsets as I could, over the years.  Star Wars figures became an obsession that I still have today.

I can still remember how and when I acquired these toys, for the most part.  I remember R2 was first, I chose him as he was my favourite character.  Then I got Chewbacca from the same shop some time later, and eventually Luke from a shop in Flint.

Photos here are of the first twelve figures released from the film.  In the UK, they were all produced by Palitoy, rather than Kenner. And yes, I had them all on cards and opened them up to play with them.  Most of the figures on these photos are the original ones I collected in the late 70’s to early 80’s.  Some are replacements I bought around twenty years ago, so I could have better quality examples in my collection.

Unfortunately, my first R2-D2 figure got a bit wrecked.  There was a story in the aforementioned comic about the heroes being trapped on a water world.  So I took them all in the bath with me.  The detail on R2 was made from a paper sticker, which surprisingly (to five year old me) came off.  Luckily my friend Brendan later gave me his R2 and C3PO, shown here.  I repaired my R2 with a home made sticker, and gave this one a different colour so he could be a different droid.

Luke is a replacement I picked up in the late 90’s.  I bought Leia as the line was coming to an end in the mid 80’s, to replace my sisters battered version, so I’d have a good quality figure of my own.

Chewie still looks pretty good, and I still have his bowcaster all these years later.  There are two versions of Han Solo shown.  The “big head” version is mine from the late 70’s, the small head I picked up years later so I would have the variation.  The big head is my favourite of the two!

Finally, I didn’t have this many stormtroopers when I was a kid.  I could only dream about having a whole squad!  I’ve picked the others up occasionally over the years at carboot sales and so on.  You always need troops!

Thanks Brendan O’Neil for R2-D2 and C3PO, and hours of playing Star Wars figures.