How long is it since the last time I went to a Comic Con? Any Comic Con? It must be pretty much exactly two years. The pandemic ruled out mass gatherings of this type completely over that time. Now, we’re back – a long overdue visit to the wonderful city of Liverpool and it’s excellent convention.

Our only initial bad luck was arriving to find massive queues snaking back for what seemed like miles. We had purchased early bird tickets for a 9am start, however arriving on schedule at nine left us in a long line with hundreds of other punters. It took an hour before we were finally inside the exhibition centre, which wasn’t a great start.

This was a case of Queue Hard, with several sequels including Queue Hard 2: Queue Harder – and finally, Queue Hard with a Vengeance.

When we were in the building, however, all was swiftly forgiven. I think we can accept some teething troubles in getting this event back up and running. It was great to finally be indoors at a Comic Con, and we gleefully threw ourselves into the experience with enthusiasm.

There were many guests signing on the day, but none that were of particular interest to myself. So, I braved the throngs of convention goers to view the treasures on sale at the stalls, purveying all type of nerdy goodness. As always at Comic Cons, there was far too much merch for me to buy it all – though I made some fine purchases, there were oodles more a timely lottery win would’ve made mine.

I picked up a couple of Star Wars The Vintage Collection figures that I needed, and a Mego Wolfman action figure that I couldn’t resist. Plus, the Christmas shopping commenced with some unusual items I wouldn’t have been able to pick up elsewhere. The only disappointment was a total lack of ReAction figures.

Of course, the main highlight of the day was the varied and spectacular costumes worn the attendees. Cosplay was alive and well, which was great to see. Hopefully these photos will give you some idea of the skill and splendour that was on show.

Despite a dodgy start, Liverpool Comic Con was a great day out. We came, we saw, we took photos and bought tat – a fine time was had by all. I’d recommend this convention as one to visit, and I’ll definitely be back.

Have a look at the Liverpool Comic Con webnet here.

Storm Hannah was raging on Saturday when my family and I made one of our regular visits to Wales Comic Con.  The usual site at Glyndwr University was drowning under torrential downpours and lashed by fierce winds.

That may sound overly dramatic, but it really was grim.  Thor, God of Thunder, must have been in a really bad mood.  Or maybe it was Storm from the X-Men?

As a result, our family day trip was a bit of a washout.  Corridors were packed out as attendees shuffled along like zombies from The Walking Dead.

We managed to get into the merch tent, which was also very crowded and difficult to get near to the stalls.  Some traders looked to be suffering as the marquis roof was leaking rainwater.

I didn’t manage to get many photos of Cosplayers or props etc.  Most people were wrapped up against the elements, or there just wasn’t room to take a pic.  I don’t think anyone particularly felt like dawdling, posing for a photo – and I didn’t fancy hanging around in the wet!

The queue to get in to the signing tent was massive, stretching outdoors as people waited to get in.  As it was still chucking it down, we decided not to bother joining the line and decided to leave.

No big deal for me as I wasn’t really interested in autographs; Mrs Platinum Al had been thinking about meeting Kiefer Sutherland for a signing though, so that never happened..

But we’d had enough – the miserable weather had us beat.  We were wet through.  Basically, we paid £22 each to look round some stalls in a leaking tent. 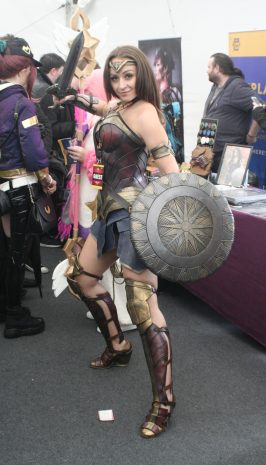 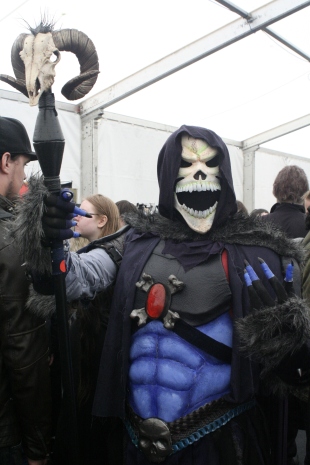 Now nobody can be blamed for the weather, it was just unfortunate.  I did feel sorry for the traders with their soaked merchandise.  And the people in the rain waiting to have a photograph with a celeb whilst they looked like they’d just been rescued from the Titanic.

And the poor celebs too – what a welcome to the country!

Well the only answer was to just get on and make the most of things, which I think most did.  The organisers can’t be blamed for Storm Hannah.  Maybe in the future they need to consider shelters for the queue, rain or shine.

Sunday’s weather was much improved, however we’d only got tickets for Saturday.  The reason for that was because Rupert Grint, some Harry Potter kid, was there that day.  For some reason this was a big deal in our house, so we booked tickets for Saturday (the only day Ron Weasley was there) rather than our usual Sunday.

After buying the tickets, we then found out that autographs with Rupert would cost over £130 – so he was priced out of our range anyway.  Ironically, had we known that cost up front, we’d have bought Sunday tickets; avoided the storm and had a great day.

Rupert Grint better not show his face round here, I’ll stick his wand where the sun doesn’t shine for him. 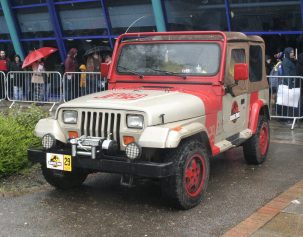 There was a very special guest today at Platinum Al’s Virtual Hot Tub.  A very special lady who I’m sure you will all be familiar with.

Yes, it’s the one and only, internationally famed adult super star Jenna Jameson!

Ms Jameson very kindly accepted my invitation to my Virtual Halloween Hot Tub party, and I was over joyed to welcome her.  Jenna looked fabulous in her sexy rubber witch dress, and had a fabulous time sipping cocktails and doing the Monster Mash.

Well not really, this is actually my Jenna Jameson Halloween action figure – but virtually anything can happen at the Virtual Hot Tub!

This Jenna figure has a broom stick and pumpkin to complement her revealing black dress.  She’s on a stand that features more Jack O’Lanterns and is adorned proudly with her name.

It’s a very cool figure, with amazing detail right down to the intricate tattoos.  And this ain’t no Barbie doll – Jenna is anatomically correct.  So if her dress and panties are removed, intimate details are revealed… 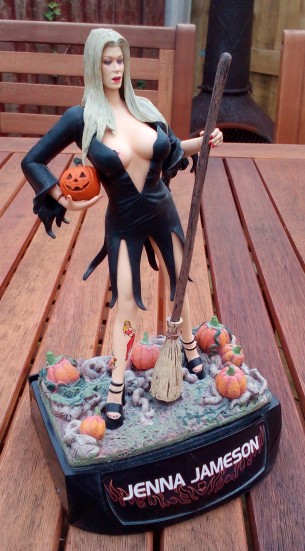