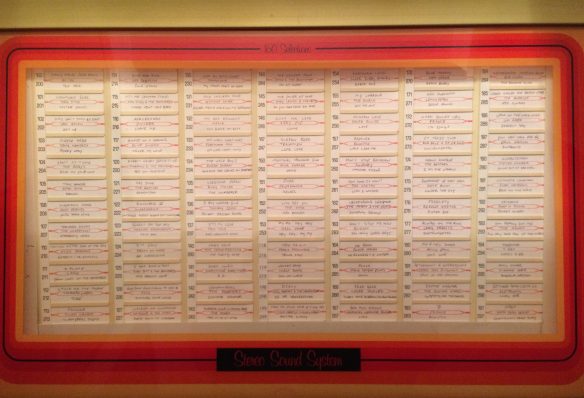 Forget using your super smart, internet enabled portable phone as a means of playing music.  And forget iPods, too – sadly the swines at Apple have decided to sacrifice their master product, in order to concentrate on their vile mutant phone.  My mate Greeny has a much better music playing machine than any of those.

Greeny has a jukebox.

The jukebox is named Florence.  After Florence and the Machine, as she’s a machine, obviously.  Florence stands proudly in the corner of the lounge, neither dominating the room or sitting back like a wall flower.  But Florence has presence: when the lights are on and the tunes are spinning, you will be drawn magnetically to this wondrous device.

He’s been collecting 7 inch singles since he were a lad, has Greeny.  Now Florence is a treasure trove packed full of delightful vinyl gems.  There’s a wild variety of musical genres in Florence, spanning the decades.  She’s regularly re-stocked and/or has the records switched out and replaced with others, keeping the music selection fresh and entrancing.

Florence holds around 84 records.  Don’t forget that there’s a song on side A and B, so that’s a generous amount of music to enjoy.

It’s a lot of fun gathering around the jukebox in Greeny’s front room, with a few beers and spinning some records.  I would love one of my own, one day – though they cost a few hundred quid, so it’s unlikely.  I’m collecting a few cool 7 inch singles just in case, though…

Here’s a list of the records that are currently stocked inside Florence.  Remember Greeny has to rotate the records, as he has far more than this!  Which songs would you choose to play?

And if you’re interested, this jukebox is a Rowe AMI RI-3.

Continuing the American theme from my last post, this time I’d like to tell you about a very special place.  It’s my favourite bar – possibly of all time.  Though it’s been a long time since I last paid a visit, I have some very happy memories.

Back in 2000, I went on “vacation” to Maryland, USA – and again the following year.  Some relatives of mine were living in the area, and I was lucky enough to be invited over to visit.  So my family and I made the trip from Wales to America.  We had a fantastic time catching up with our family and being amazed by the country itself.  An unforgettable part of the trip was when we were introduced to the BWB.

BWB stands for Buffalo Wings and Beer – which is, quite simply, what the establishment offers.  It’s a bar, and a local of sorts to my relatives, and we were to visit there quite a few times!

Quite different to the pubs we’re used to at home, the BWB is a sports bar also offering food.  So unlike our boozers back home, you can have a few (or several) beers and you don’t need to leave to get food.  When you get hungry, you can order food right there!  Now we have restaurant pubs in the UK, but at the BWB you can order food at later times not just during the restaurant opening hours.  No need to run off to the kebab shop here.

Great food too – I became a big fan of the chicken wings in particular.  But not too hot!  This was also where I grew to love Samuel Adams Boston lager too.  Not to mention the buckets of beer – literally of bucket with ice and several bottles of booze!  Fine ale and good food – it couldn’t get better.

Except it could.  BWB also housed the coolest jukebox ever, pool tables, pinball, dart boards, arcade games – awesome stuff.  As a sports bar, the TV Screens showed sports, but as this was the US the entertainment was not what I was used to.  I even saw a vert skateboarding competition being shown there once.

It must be said that the people in the BWB were great also – welcoming, polite, fun – both customers and staff.  They were pleasant and genuinely interested in us as visitors to the country.

If you’re ever in the area, make sure you visit.  There are a few BWBs in the chain, the one I visited was in Cloverly.  Awesome place.  I hope I get to go back there someday.

With thanks to Lesley, Simon and Ben Stagg, who introduced us to the world of BWB!