Now this is a strange little film.  Another Amicus production, though not an anthology this time, Scream and Scream Again is a baffling amalgam of sci-fi, horror, and at least three plots that seem totally unrelated at first.  So in a way, it almost is like a portmanteau horror, bizarrely.

Here we have a vampire killer in London, draining his victims of blood.  There’s also another thread relating to a dictatorship in an obscure European country.  Plus, someone is removing limbs – one by one – from hospital patients.  All very odd and with no connection at all, the audience may assume at first. 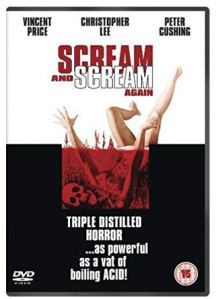 The plot strands eventually come together by the end, but most viewers will be confused beyond caring if they get that far.

Scream and Scream Again proudly proclaims that it stars Vincent Price, Peter Cushing and Christopher Lee all in the same film.  However, Cushing is only in one scene (with neither of the other two stars).  Lee and Price both pop up in cameo roles, having only one scene together.

The film does have it’s moments, however.  There’s an extended chase scene as the police pursue the serial killer which is actually quite exciting, despite being dragged out.  And Alfred Marks as the detective in charge puts in an admirable effort.

So yes, a strange little film, and not one with much to recommend it.  Unless, like me, you’re fairly obsessed with British horror films from this time – in which case Scream and Scream Again is worth ticking off your list.

More Stephen King for our latest helping of Halloween Horror Fest movie madness.  The Dead Zone, directed by David Cronenberg, is based on the King novel of the same name.

In this film, we meet Johnny Smith (Christopher Walken), a down to earth school teacher who falls into a five year coma following a horrendous car accident.  When he comes to in hospital, Johnny finds that he has gained psychic powers.

Johnny’s new-found abilities lead him to intervene in some potential disasters, and help the police in their search for a serial killer. 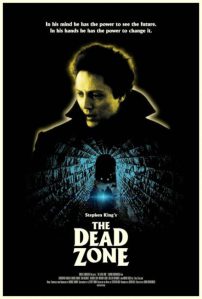 But an encounter with dodgy politician Greg Stillson (Martin Sheen) leaves Johnny with a vision of Stillson becoming the US President and causing mass destruction.  Smith has no choice but to ensure that this never happens…

Walken is superb in the lead role, always believable despite the fantastic premise.  The audience can’t fail to empathise with the character- Johnny has lost everything following his accident – and Walken’s performance is spot on.  Johnny Smith isn’t a hero, he’s just a normal guy who has found himself thrust into bizarre circumstances.

Sheen is chilling as the unhinged senatorial candidate.  Brooke Adams, as Johnny’s lost love Sarah, is very moving and Tom Skerrit is note perfect as the beleaguered Sheriff.

Cronenberg gets the best out of his cast and manages to distil the novel into an authentic and highly entertaining thriller.  The Dead Zone is not the scariest Halloween movie, but it is immensely watchable.

We’re well into November now, but I still have a few Halloween horror reviews left to cover.  Bonfire night?  Who cares?!  What fireworks?!

Jodie Foster plays FBI agent Clarice Starling in this fantastic film, on the trail of serial killer “Buffalo Bill”.  To find the killer she enlists the help of incarcerated psychopath Hannibal “the Cannibal” Lecter (a superb Anthony Hopkins in a career defining role).  Utilising Lecter’s knowledge to enhance the psychological profile of the killer, the young agent finds herself embroiled in his mind games, as the race to catch Buffalo Bill gains further urgency. 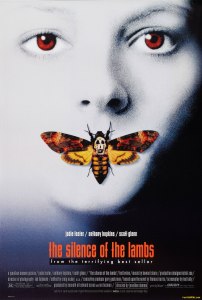 If you’ve never seen this film, see it.  If you have, watch it again.  It won multiple Oscars and is absolutely captivating (no pun intended) on every viewing.  Brilliant performances; scenes that look and feel real; and a chilling story make The Silence of the Lambs unmissable.

True, there are no monsters or supernatural occurrences in this movie.  Yet the sense of unease and tension created in The Silence of the Lambs mark it as a real horror film with chills beyond compare.

Another film that needs no introduction, though of a vastly different style; Ghostbusters is an 80’s classic.  Featuring a team of scientists who, after finding themselves thrown out of their university, form a new business hunting ghosts, this film has laughs and thrills aplenty.  Taking New York by storm with their paranormal investigations, the Ghostbusters wind up facing a threat that is really out of this world! 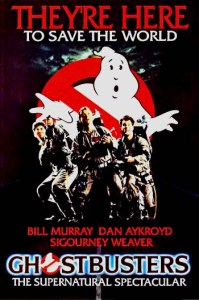 The three main Ghostbusters – Bill Murray, Dan Ackroyd and Harold Ramis – are all excellent; with Murray in particular looking like he’s having tons of fun.  Ernie Hudson as the fourth member does a good job, but is somewhat underused.  Sigourney Weaver puts in a good performance as the musician caught up in a pan-dimensional event she doesn’t understand.  And keep your eyes on Rick Moranis, who is constantly hilarious.

Highly recommended as some fun Halloween viewing, Ghostbusters mixes a few spooky moments with some very funny scenes.  Add in a great theme tune and some memorable quotes, and you really can’t go wrong.

Who ya gonna call?

That’s it for another year, thanks for reading Halloween Horror Fest!

Yes it’s Hammer time at the Virtual Hot Tub, with this macabre classic from the legendary British studio!

A remote village, quarantined due to a strange plague, becomes the host to a travelling circus.  The circus entertain the villagers and distract them from their everyday woes; though they hide another motive.  That secret agenda involves a vanquished vampire count, and a despicable plot for revenge!

There’s no Cushing or Lee in this early seventies curiosity, yet Hammer are able to create a new spin on their Gothic tales with this unusual and striking film.  The boobs and gore identify the seventies vintage of this film, yet there’s plenty of atmosphere to embellish the tale.  Vampire Circus is a novel idea, and proves what the studio could do even without relying on the big names (stars or monsters).

Sadly this isn’t a feat that Hammer would replicate often in their twilight years.  Never the less, Vampire Circus is much more hit than miss.  The viewer will witness some real spectacle, some real frights – and the dark atmosphere of Hammer horror at it’s best.  Recommended. 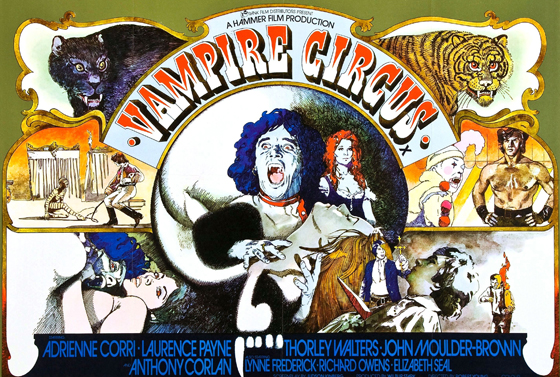 The crimes of Jack the Ripper are given a fictionalised re-telling in this 2001 Hughes brothers film.  It’s based – very loosely – on the Alan Moore graphic novel; relying heavily on conspiracy theory, a dash of clairvoyance and Johnny Depp as Inspector Abberline. 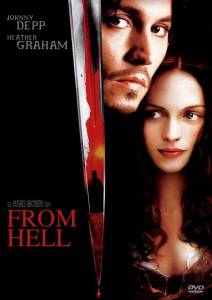 The conspiracy at the heart of the story is, of course, absolute nonsense, but then the original source novel didn’t set out to identify the culprit.  Rather, From Hell was a dense tome covering the mythology and occult roots of London and it’s citizens.

The film version goes for a more straightforward dramatic approach, as we follow the case and slowly unravel the mystery of the killer’s identity.  If you can suspend disbelief, forget the ridiculousness of it all and enjoy the ride, it’s a great film.  Fantastic sets give From Hell a very genuine feel, along with some decent performances (though not all) and enough shadows and murder to make it an effective thriller.

Go and read the book – it’s an incredible work.  But I’ll happily state that despite the clichés and the total fudging of fact and fiction – let alone disregard for the source material – the film From Hell is definitely worth a watch.