Well, here we are then.  The debut album from Bradford based sonic butchers, Son of Boar.  And yes, I am quite excited about this release.  There are long lost civilisations existing in the South American jungle that, despite having no contact with the outside world, are aware that your pal, Platinum Al, has been desperate to hear this cacophonous compendium for some time.

So, is it any good?  Well yeah, obviously.  But just what kind of good I shall reveal.

There are five tracks on this eponymous release, across which Son of Boar attempt to cover as much ground as possible.  Yes, this is Stoner Doom – it is heavy, it has groove, it has a windswept musical vista that is both fierce and welcoming.

I’ve already reviewed first track, “Stoned Wail”, when it was released as a single a while ago.  This mix is punchier though, and still satisfying regardless of any familiarity.  The calm wash of ocean waves accompanies a benign introduction; until, just over two minutes in, the full electric muscle of the band is released.  SOB hit their groove and plough relentlessly on, whilst vocalist Luke roars about some sweet girl called Mary.  I don’t know who Mary is, but she seems like a nice, compassionate lady.

The slow sludge of song number one is contrasted by “All in Your Head”, where SOB pick up the pace and gallop home with a Kyuss covering Maiden flourish.  Great rhythm work from Gaz (bass) and Luke D (drums).  “Satanic Panic” then devolves brilliantly into the sort of the Corrosion of Conformity style Sabbath worship that enthralled James Hetfield.  Powerful, even graceful, but remorseless.

“Snakes and Daggers” reminds me of Motorhead played too slow (33rpm not 45, for the fossils out there).  Here the pace varies, with a great, almost psychedelic melodic swash emerging like a surprise visit from a long-lost drinking buddy.  Then your old pal gets stinking drunk and kicks off in the taxi rank, and you’re desperately clutching your kebab in puzzlement.  What?

You should listen to “Cities of the Deadeyed Priestess” just because it’s a genius song title.  It also has some bizarro samples that I need to investigate.  Musically, this is another brutal head crusher: meat and potatoes riffs and fine melodic hues courtesy of guitarists Lyndon and Adam.

And there you have it: five songs, one debut album.  A fine band; they’re awesome live, have the best t-shirt designs I’ve seen in donkeys and are creating a real sense of cult-like, underground authenticity that is addictive.  If I could afford to buy a copy of this album for everyone reading this review, I would.  Even that weirdo at the back.

And Son of Boar have only just begun their journey…

This review was brought to you by Platinum Al, in association with the mighty Ever Metal. 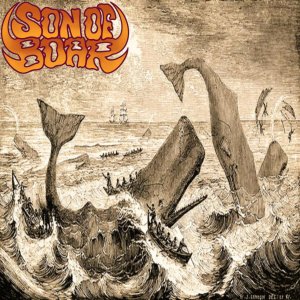 Singles don’t often get reviewed here at Ever Metal, purely because there’s so damn many of them.  They just can’t compete with the album reviews.  But rules are made to be broken, and this release from Son of Boar demanded some attention.  Having witnessed the live onslaught of this band at Pentre Fest earlier this year, Son of Boar have risen on to my personal favourites list, and I’m damn near rabid for any new material.

Waves crash as a mesmeric bass begins to chime, creating a deceptively ambient vibe.  Guitars and drums warm the sound as the band slowly build momentum.  They’re in no rush, but when the main riff kicks in, it’s worth the wait.  Luke’s vocals roar and the song rises like a leviathan from the depths.  “Stoned Wail” is 9 minutes of powerful, groove laden doom rhythms: thundering bass, churning guitars and crashing drums.  This fisherman’s tale is indeed a whopper of humungous  proportions.

With two additional live tracks (“Outlet” and the boogie influenced “The Weekend”), this is a great introductory package to a band destined for big things.  “Stoned Wail” is taken from the forthcoming debut album, which, to be honest, I’m shitting my shoes off in anticipation for.  TUSKS UP!

Get yerself on over to witness Son of Boar at Bandcamp and Facebook, or maybe YouTube if you fancy it.