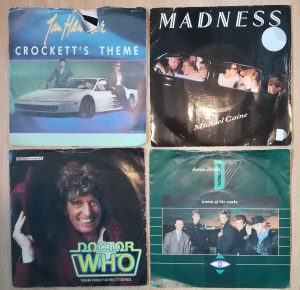 Hello there, reader!  Welcome to my Virtual Hot tub.  Grab a drink and chill out in the warm, comforting water – it’s time to play some more 7 inch vinyl records!

That’s right folks, I’m spinning more records and having a little drinkie.  First off the top of the pile, A side then B side, working my way through the vinyl I’ve not played yet.  No picking and choosing, just playing whatever’s next.

Yes, that Glen Campbell/Rita Coolidge IS the same as the Quo classic!  Quite a few fun tunes in that session, including one of my favourite Madness songs ever, double for Elton, and a great Miami Vice theme.

Join me again soon for another Singles Night!

For this month’s Bring Your Own Vinyl Night, I decided to have a theme for my set.  Although it was only early in the month of October, I decided to opt for a Halloween theme.  My music choices would have a horror element, or something dark and macabre.

If you’re not familiar with vinyl night, here’s the basic outline:

Adam was first up tonight, his set list went as follows:

Then it was my turn…

What better way to start than with this ghoulish classic?  I found this album a few months ago in a charity shop, and couldn’t believe my luck.  It was only a couple of quid, and worth the investment even though I don’t usually spend more than a pound!  This is of course the sixties gem that sound checks various monsters, with Pickett impersonating Karloff (and Lugosi too).  It’s great fun and essential for any Halloween party!

The first time I ever heard the Damned was when “Eloise” got to number 3 in the charts.  The second time was this fast paced, tongue in cheek ode to horror movies, on the brilliant Young Ones horror spoof episode “Nasty”.  The Damned appear and play this song in the Young Ones’ kitchen.  I was hooked straight away, saved up some money and bought an album with both tracks on it.  Given the exposure this song had, it constantly amazes me that “Nasty” was relegated to a B-side and hardly ever shows up on Damned compilation albums.  I’ve seen the band live more times than any other, but only saw this song performed for the first time a few weeks ago!  Anyway, the Damned are another essential for a Halloween theme.  Still a great song.

Although not a horror related song as such, I couldn’t resist the chance to play something by the Dark Lord of rock himself, Danzig.  Instead of a more obvious bone rattling heavy rock number, I chose this incredible ballad that was hidden away on Danzig III: How the Gods Kill.  Glenn shows off his great vocal abilities here on a song that is more Roy Orbison than Black Sabbath.  Appropriately dark and wind swept, this is a morose beauty of a song.

To be honest, I was spoiled for choices for a horror theme, there are tons of songs I could’ve played.  Despite risking a Glenn Danzig overdose, I just had to spin a Misfits song.  This band took the horror punk template established by the Damned, the Ramones and the Cramps and ran with it, off into a creepy cemetery populated by every 1950’s B-movie monster ever.  “Walk Among Us” is one of my favourite albums ever, and this short sharp song dedicated to proto Goth babe Vampira is one of their best.

So there you have it – another triumphant evening for Bring Your Own Vinyl Night.  There were old songs, new songs, obscure and obvious songs.  There’s always something to make you go away and research another band, that’s the beauty of these nights.  My personal favourite was hearing “Gut Feeling” by Devo!  Already looking forward to the next one.  A theme?  We’ll see…

The Halcyon Dreams blog is here, where you can find listed (very helpfully) all of the songs played on the night.