You know what that means: an evening of me playing through a stack of vinyl singles, one after the other, whilst imbibing the booze. It’s more fun than it sounds, honest! There are untold treasures in my pile of records waiting to be rediscovered – plus a few duds that should be consigned to the pop junk pile.

Join me now, on yet another daring voyage into my vinyl collection…

Well, I had to own a copy of that Paul Simon classic, right? And the Slade B-side is tantalisingly close to hot tub, though I wouldn’t want Noddy and pals murdering anyone in my Virtual Hot Tub.

A couple of Steppenwolf killers there: look at that Easy Rider style double A side! One of the most underrated bands ever. I was lacking an Iggy single in my collection, hence that purchase – but didn’t realise that “The Passenger” was on the B-side. That’s definitely going in my jukebox, when I get one.

Regular readers will know how much I adore the lovely Belinda Carlisle. That single is a picture disc, with a bonus photo and frame (see pic) – not bad for a 50p charity shop purchase. On the other hand, I’ve never rated Kylie (I much prefer her sister, phwooar!) – but that tune’s not bad.

With some legendary country and pop – not to mention awesome tunes from Queen, Bowie and Sweet – that’s a pretty damn fine playlist. “Convoy” was one of my earliest favourite songs, by the way.

I’ll be back soon with another Singles Night – stay tuned!

Hello there, reader!  Welcome to my Virtual Hot tub.  Grab a drink and chill out in the warm, comforting water – it’s time to play some more 7 inch vinyl records!

That’s right folks, I’m spinning more records and having a little drinkie.  First off the top of the pile, A side then B side, working my way through the vinyl I’ve not played yet.  No picking and choosing, just playing whatever’s next.

Yes, that Glen Campbell/Rita Coolidge IS the same as the Quo classic!  Quite a few fun tunes in that session, including one of my favourite Madness songs ever, double for Elton, and a great Miami Vice theme.

Join me again soon for another Singles Night!

Unlucky for some, eh?  Well, this thirteenth edition of Singles Night was far from unlucky for me – I had a great night.

It’s been a while since I’ve thrilled you with a blog like this.  So what is Singles Night, exactly?  Well, I’ll tell you: it’s basically me playing through a stack of 7 inch vinyl singles in the order they’re stacked in.  Like a jukebox, but not as good. 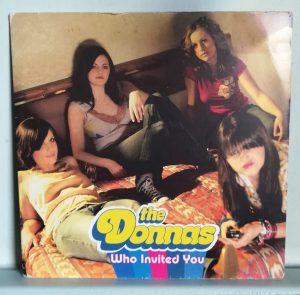 The quality of these discs can vary dramatically.  Some are classics I’ve spent a couple of quid on.  Some are charity shop finds, or even donations given to me.  As such they can range from the unfathomably cool to the stinkiest of cheese.

It’s always good fun though.  So take a dip in the Virtual Hot Tub with me, and enjoy a playlist unlike any other…

My favourite of all of those records is the Donnas single – just awesome rock’n’roll.  They’re a great band, I just wish I had the album on vinyl.

Other classics from Motorhead (one of their best singles, with a beauty on the B-side); Judas Priest at their best; great Small Faces and one of the greatest singles of all time – “Kung Fu Fighting”.  If I remember, I was actually up on my feet at that point, doing a few martial arts inspired moves.  I’d been drinking, after all.

There’s a fair spread of cheese in that lot too, though you can’t go wrong with “Y.M.C.A.”, “I Will Survive” and “A Good Heart”.  Not to mention one of my childhood favourites, “Whispering Grass”.  Enjoyable songs all.

The one real stinker of the bunch was the Bruce Willis tune.  I remember liking that as a kid, ‘cos I was a fan of Moonlighting.  Listening to it again – with its terrible 80’s production and Bruce’s “adequate” voice ruining a soul classic – it’s less Die Hard than Die of Embarrassment.

It’s time for another night of spinning wax and drinking booze, as we endure another Singles Night at Platinum Al’s Virtual Hot Tub!

This is all about playing through a never ending pile of old 45 rpm vinyl singles, and making the best of it.  Some of these songs are bona fide classics, some are far from it.

The only rules are: play whatever’s in the pile, in order, A side then B side.  No skipping records – however much you may want to.

A real eclectic selection this time, with not much of preferred rock till the end of the session.  Still some great fun songs, a few novelty hits and some easy listening master pieces there.  In my defence this time, a few of those records were given to me (and I’m stupid enough to take them).

If you’re wondering what Wonder Dog is, it’s basically a pop/disco number with a dog barking the melody.  It’s actually not as bad as it seems.

And I quite enjoyed the Four Tops song – I’ve only just found out that it’s from the film “Grease 2”, which is apparently a disaster.  As the first “Grease” film is garbage,  the sequel must be really bad.

Playing music, having a few drinks – it’s fun.  In this case, what I do (as regular readers will know), is play through a stack of 45 rpm singles and see what Lady Luck decides to bestow on me.

Some of the singles are classic, some less so.  Some are cheesy, some have at least some small notion of integrity.  One thing’s for sure: one way or another, all of the following 7 inch singles are part of my vinyl collection – there’s no hiding from the shame.

Lets see what we got this time:

There you go: and those selections (random as they are) weren’t all that cheesy after  all.  Boney M.?  Under rated.  And that b-side reminds me of summer.  So rather than a few pungent offerings, there’s quite a few great ol’ rock’n’rollers dominating that playlist.

A final word regarding Ned’s Automatic Dustbin and Inspiral Carpets.  Both indie bands, my least favourite genre of all.  I found those singles super cheap in a charity shop, tried ’em and they weren’t too bad, really.

I had another great night recently, playing a load of old 7″ singles.  What happens is, I acquire these singles from record fairs, charity shops or maybe contributions from friends – and I spend an evening playing through the pile.  The’re stacked in order of how long I’ve had them – oldest near the top – and not organised in any way.

So I get a few drinkies down me and play the records in the order they reveal themselves.  Which can be fun – no skipping, play whatever’s next in the pile.

This system always means that no matter how many cool songs I play, there’s always a few dodgy tracks in there too.  But then let’s just call those less aspirational songs “guilty pleasures”, and enjoy them for what they are.

Last time, I claimed that the rest of the stack of 45 rpm magic wouldn’t reach as high a standard.  I was wrong.  Here’s the playlist, which includes some absolute monsters…

Fantastic stack of singles!  Some absolute classics with a couple of cheesy horror stories.  Any playlist that includes AC/DC and the Beatles can’t be half bad.  I’ll be doing some more of these singles nights soon, stay tuned! 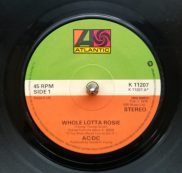 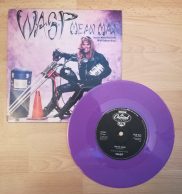 Welcome to another Singles Night at the Virtual Hot Tub with your host, Platinum Al!

As previous, I spent the evening listening to a stack of 45 rpm singles that I’d acquired over time from several sources.  Whilst imbibing some fine alcohol.  The following is a list of those singles, A and B sides listened to in order.

There are some particularly sweet slabs of vinyl in this edition.  As always, however, we’re never too far away from some rank cheese…

Note: the B-side of the Anthrax single is actually their track “Imitation of Life”. 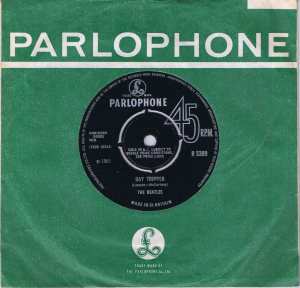 I’m mighty proud of that selection.  Not that I had anything to do with it, the choice was random – I just took whatever disc was top of the pile and made my way through.

But what a bunch of scorchers!  One of my favourite Beatles tracks; Cream; Booker T; some classic metal and the Beastie Boys.  It doesn’t get better than that.

Or rather, it won’t.  Most of the rest of the pile of 7″ singles isn’t up to that quality…

It’s been a while, but time to work through that stack of 7″ singles again.  I had a few beers and listened to the tunes in my collection – good and bad – in order, both sides.

There have been a few stinkers in previous editions.  This week, however, the good outweighed the cheesy for once.  Just about.

Regular readers will be aware of my love for vinyl records: beautiful, spinning discs revealing a world of aural pleasure.  Most of my attention is devoted to albums, though I’ve also amassed a fair collection of 7 inch singles over time.

Back in my younger days, I would pick up singles to embellish my album collection with b-side tracks excluded from the main release.  I’d also pick up some interesting, groovy records that were within my budget and offered something different to my music library.

Over the last couple of years, I originally ignored the 45 rpm singles, but gradually I’ve started picking a few up.  One of the main influences for this was my friend Greeny’s jukebox, installed in his home, which I though was really cool.  It inspired me to pick up a few classics, in order to compile a wider range of musical genres on 7″.

You never, know, I may just get my own jukebox one day.

And so I’ve bought singles from record fairs, charity shops and car boot sales to complete gaps in my collection.  This has left me with a stack of 45s that I haven’t got round to playing yet.

So I had the idea for Singles Night:  I would play the records, both sides (A then B) from the top of the pile down, oldest to newest.  Regardless of genre, or what ever mood I was in.  Almost like the random playlists I’ve posted here before, but analogue.

The reader will notice that there are some cheesy, if not disgusting, purchases included amongst the gems in this list.  Everyone has some guilty pleasures; in the land of the 7″ single, my love of the truly awful can be fully exposed.

Here’s the list of what I played.  May the gods of music forgive me…

I could write notes about pretty much every one of those songs to elaborate on why they’re in my collection.  Some are classics – Bowie, Hawkwind, Beach Boys etc. and need no introduction.

But as a means of explanation for some of the really ripe songs, let me say this: Sinitta and Dannii are in my collection ‘cos they’re well fit.

Oh, and “Turtle Power” is an awesome song and needs to be heard again!

I hope you enjoyed that playlist, reader.  I certainly did, and there will be more of this in the future.

They’re crazy, cute, playful and lovable.  They’re agile and graceful and beautiful.  But most of all, they are loyal little companions who, despite their reputation, are full of affection.

To honour my furry feline friends – past, present and future – I collated another one of my themed playlists.  This collection of songs all have a connection to cats in some way, and create an eclectic compilation that crosses categories.

You can compile a similar list, and I hope you and your cat enjoy!

Sadly, I forgot to add Nina Simone’s “Feline Good” to the list…

Till next time: ciao, cat lovers!