Back in early 1970, I was in LA working for Jim Morrison, singer of the Doors.  Morrison was a pretentious, drunken bore – but we did have a few old laughs.  This one time, Jimbo was mid-liaison with a young lady in her upstairs apartment, and I had to pick him up in his new car before the pair were interrupted by her husband.  Parked in a gleaming white Dodge Challenger under the first-floor window, there was no fire escape and Jim had to jump out of the window onto the roof of his car.  It was a hard top, not a cabriolet, and Jim’s fat arse flattened it like an egg box when he hit it.  He wasn’t in the best shape at that point.  Wrecked that beautiful car, too.  Luckily, I could still see out of the window, and drove off in hysterics, while chubby Jim tried to squeeze into his tiny leather trousers.

Great days, indeed.  And the memories of that time always come flooding back when I spin one of these Brown Acid compilations from RidingEasy Records.  Yet again, the guys have dug out some long-lost treasures of the early hard rock and proto metal variety, to return phoenix like from the netherworld.

Things get underway splendidly with “Run Run” by Max, a funky riff rocker that will light up your lava lamp straight away.  It’s probably my favourite on another strong collection.  Next is “Dark Street” by Ralph Williams and the Wright Brothers – fuzzy guitars and great vocal melodies with a faint air of menace.  Geyda provide “Third Side”, another pacey rocker, reminiscent of the MC5.

Following that, there’s Gary Del Vecchio, who’s apparently “Buzzin’”.  But then, who wasn’t in those days?!  It’s party time blues rock in the vein of early Zep.  John Kitko is suffering from “Indecision”, as proven by the psychedelic jam of the start contrasting with the speedy, aggressive main body of the song – with Alice Cooper-like vocals.

“Hope” by Bacchus reminded me of old Jimbo’s band doing “Roadhouse Blues”.  Master Danse are up next with a very heavy blues number, “Feelin’ Dead”.  It’s a slow, ponderous song with a melancholy vibe – which I’ll swear was stolen by The Cult for their obscure B-side “Wolf Child’s Blues”.

Orchid offer up the weakest track on the album, “Go Big Red”, a fairly unexceptional garage rock number.  It’s fun and still has some charm, though.  Then you’ve got Dry Ice and “Don’t Munkey with the Funky Skunky”, a crazy fast paced number that’s like The Monkees and Jimi Hendrix jamming a Eurovision novelty song.  On drugs.  Finally, a strong final track from Good Humore, “Detroit” – a catchy tribute with a sprinkling of MC5 at their most rock’n’roll.

And there we have it: another fine collection of rock fossils unearthed and displayed for our enjoyment, never to be forgotten again.  It may be “the Thirteenth Trip”, but this ain’t unlucky for some – it’s gold all the way.

Remember that World Wide Web thing? Well, you can check out RidingEasy Records at various site webs, such as their own, Bandcamp, Facebooks, Twidder, ChewTube and Insta.

This review was presented to you by Platinum Al in association with Ever Metal.

Time for another album review: as originally published by Ever Metal, now here for your enjoyment too… 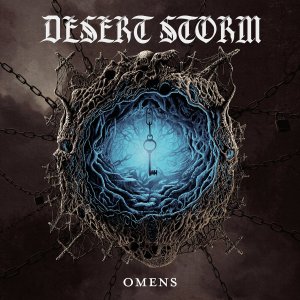 Put your feet up, relax – pour yourself a drink and take the weight off your feet.  All you need to do is chill – I’ve already done the hard work.  I’ve found your new favourite band: they’re called Desert Storm, and their latest album has just been released by APF records.

If you’re new to the name, Desert Storm are from merry old Oxford; and since forming in 2007, have been building their following formidably.  They’ve appeared at major rock festivals; plus supported and toured with some personal heroes of mine (Corrosion of Conformity, The Atomic Bitchwax amongst others).  I saw Desert Storm a few years ago supporting the mighty Karma to Burn; they managed to steal the show from the headliners, as far as I was concerned.

Opening with a sombre, haunting spoken word piece, Omens proceeds to take the listener on a journey that is powerful, yet also introspective.  It’s an otherworldly trip that’s both visceral and immediate, but also demands greater exploration.

“Black Bile” demonstrates the strategy perfectly: heavy, grinding and relentless – with moments of melody that blend into the whole without jarring.  In absolute basics, this is the sludge of Down combined with the aspirational progressiveness of Mastodon.  Thudding, head banging riffs adorn “Vengeful Gods”, but there’s also an almost Morricone-like cinematic sensation as the song develops and grows.

At times anthemic, there are also magnificently effective sections of the songs that contrast beautifully with the hard driving doom metal.  “Pain, Grief and Suffering” features an extended mid-section that is beguilingly serene.  When the heavy re-enters, it’s all the more neck-breakingly persuasive.  Throw in a captivating solo and you’re on to a highlight.

“The Path of Most Resistance” builds from humble beginnings to a massive groove riff of Sabbathian splendour; whilst “Lockjaw” is short and brutal.  This leads us to the final track, “Rebirth”: a masterpiece that is heavy only in sentiment.  What a song.  Despite a medieval vibe, it’s the ideal soundtrack to spin whilst driving through the desert in a stolen Dodge Challenger as the sun sets, with Smokey on your tail.

Every song on Omens can be enjoyed on its own merits, but as a whole plays as a genuine compendium that the listener can enjoy from start to finish.  I knew Desert Storm were good, but I didn’t expect them to have grown so much.  Or deliver a new album with so much scope.  Here’s a British band that could step up into national – and then international – consciousness.  They just need your support.  Do it.  I’m off to buy the vinyl version.

Talking about deserts – did I tell you about that infamous escapade on one of my legendary soul-searching soirees into the Mojave?  I crept into my usual cave to seek shelter, only to encounter Jim bloody Morrison hogging it.   He was out of his gourd on peyote and mumbling about Aldous Huxley or some such.  There was no way I could meditate with that loon around, so I threw him out.  Break through that to the other side, Jimbo!  My Yaqui shaman and I needed the space to contact Atlantis.

STOP PRESS: Putting my money where my mouth is, I stumped up hard earned cash for a vinyl copy of this album.  I am very glad that I did!

Buy their stuff on Bandcamp.

For APF records, check out their expertly crafted website here.

Ir find them on Facebook and Bandcamp, you won;t regret it.