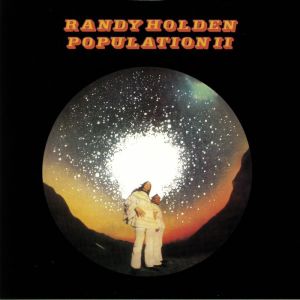 First of all, an important note for all readers: Randy Holden is NOT the name of a winning hand in strip poker.  I used the phrase at a recent gathering at my Rock’n’Roll Naturist Society club, and nearly got a bunch of fives from Ozzy as a thank you.  Tommy Lee was up for it though, as you can probably imagine.

Anyway, Randy Holden is actually a guitar pioneer who served some time with proto-metal giants Blue Cheer, before splitting to take the helm of his own project.  Population II was the result – a far ahead of it’s time Big Bang of doom and sludge metal.

Originally receiving a limited release in 1969, this album has earned cult status with afficionados of early heavy rock.  And it’s no surprise why; “Population II” is a huge sounding, riff driven behemoth that sounds like it simply can’t have been created in that time period.

But it was.  The era that popular culture tells us was the age of peace and love also birthed this unholy slab of heavy noise.  Randy Holden, like his previous bandmates in Blue Cheer, was happily stomping all over flower power.

Of course, “Population II” is totally over the top.  “Guitar Song” is the first track, featuring the somewhat unimaginative opening line “I love the sound of a guitar playing” – so no marks for lyrical finesse.  If you’re after poetry, this probably ain’t for you.  Instead it’s six minutes of slow, heavy driving riff-based rock that sets the tone for the album.

“Fruit Icebergs” is an outstanding name for any song; in fact, I might steal it for a band name.  Slow like cooling lava, with a doom-laden melancholic sound –  It’s dark in a Sabbath way.  Whereas the shorter “Between Time” picks up the pace a little and borrows a chorus from “Jumpin’ Jack Flash”.

“Blue My Mind” is less gloomy, but certainly taps into the blues with a hint of Hendrix.  The final song, “Keeper of my Flame” is over 10 minutes of pulsating, repetitive riff wrestling that doesn’t out stay it’s welcome.  Ol’ Randy stretches for the epic here and pretty much nails it, strangling that guitar and taking the listener on a heroic journey.

Yet another history lesson for which we can thank the scholars at Riding Easy Records, Randy Holden’s “Population II” is back in circulation and worth taking time to investigate.  You’ll wonder how this was lost for so long.

Don’t forget to visit Ever Metal – where this review first appeared  for all your rock and metal news.

No, not that kind of Singles Night!  This is all about working through the stack of 45 rpm singles that I’ve picked up from various sources over the last few months.  I play them in order, regardless of how good or bad they are, and whether I’m in the mood for a certain genre or artist or not.

And there are some stinkers in the collection.  Some ripe specimens that I just had to own for some reason or other.  Don’t ask me, none of it makes much sense to me either.

There are, of course, a few absolute gems in there too.  Let’s see how this current session played out…

Hey, you know what?  I think I acquitted myself quite well with that selection.  Despite kicking off with yet more Sinitta, there were definitely some great tracks in that list.  Let’s wait and see how I do next time… 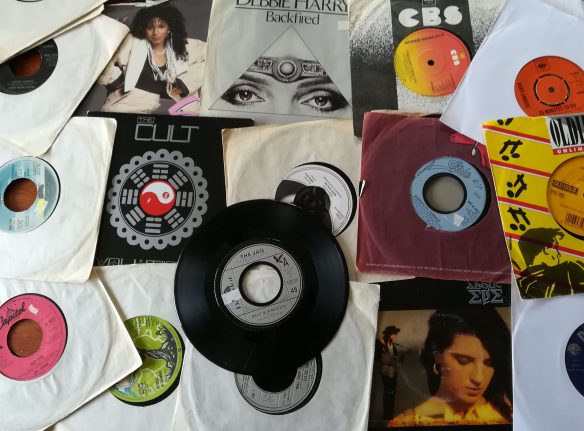 Almost a year to the day since I last saw the mighty Scorpion Child rocking out, and in the same venue too.  This time the crowd numbers are down, but hell – it was a bleak Tuesday evening.  No excuse though – people should have been at the Live Rooms for this gig.

I just managed to catch the end of the first set, by UK band The Bad Flowers.  This three piece were all power and chunky riffs – think Motorhead menace with some ZZ Top rock in there.  Very appetising and well worth keeping an eye on.

Next up was Jared James Nichols, with his two bandmates, bringing us our second three piece of the night.  This American band play a fine blend of bluesy hard rock, delivered with a confident, killer attack.  Mountain were a fair comparison – they rocked out a crunching “Mississippi Queen” just to prove it.  Quality entertainment with a boogie groove!

The last time I saw Scorpion Child, they were here on tour with Crobot (another superb band).  Now with their second album – the extremely brilliant Acid Roulette – firmly under their belt, I was keen to witness these new rock’n’roll superstars-to-be again.

Scorpion Child deliver music that is well schooled in the classics of the past – Zeppelin, Sabbath, Purple.  And like those bands they’re able to deliver monster rockers like “Liqour” and “She Sings, I Kill” along with some superbly epic moments that build beautifully (“Survives” and “Acid Roulette”).

There’s also a thinly disguised darkness about the bands sound, not exactly doomy but much more in the vein of 80’s bands like the Mission and the Sisters of Mercy.  At their most bombastic, Scorpion Child are reminiscent of The Cult (from whence they claimed their name).  Apologies for endless musical comparisons – but this band really have some classic style that merits a bigger fan base.  Throw in some Danzig and Soundgarden and you’ve got a list of some of my favourite bands.

A great deal of the set is from the new album, showing justified confidence on the bands part.  Songs like “My Woman in Black” and “I Might Be Your Man” are thundering hard rock compositions that are classics in the making.

A great gig, shame about the low attendance (and the lack of merch!) – but brilliantly infectious modern hard rock.  I’m off for fish’n’chips.

You can find Scorpion Child, Jared James Nichols and the Bad Flowers on Facebook.

Tim Burton and – who else? – Johnny Depp bring us Dark Shadows, based on the cult late ’60’s TV show of the same name.  It’s a mix of horror, comedy and drama that is happy to lurk in Gothic darkness, but also offers a campy humour.

Barnabas Collins (Depp), heir to the wealthy Collins clan fortune, makes the mistake of spurning the love of Angelique (Eva Green).  Angelique happens to be a witch who curses Barnabas to become a vampire.  After being imprisoned for 200 years, Collins is awoken and finds himself in the year 1972.  A man – or vampire – considerably out of his time, Barnabas returns to the family home with the intention of restoring the Collins family to both wealth and harmony.  Aided by matriarch Elizabeth (Michelle Pfeiffer), Barnabas faces Angelique once more; whilst also attempting to help his family and win the love of his life.

Does that sound like fun to you?  It did to me.  Which is why I’m surprised that some people didn’t dig this retro gem.  The mixing of genres may have confused some audiences, but to me Dark Shadows is a delightfully ghoulish confection in the spirit of the Addams Family and The Munsters.

I enjoyed the comedy elements, and there’s enough blood to tick the horror box.  Most of all though, I love the 1970’s setting – obviously inspired (again) by Hammer, there are cool cars and an exceptional soundtrack.  Alice Cooper even has a cameo as himself, for goodness sake – playing two classic Coop tracks!

Great cast, cool atmosphere – it all adds up to a winner in my book.

The first in an ongoing series, where I will be discussing some of the best records ever made.  These are the “classics” of my record collection, that no-one should be without.

Released in 1985, The Cult’s album Love still sounds fantastic to this day.  It’s a potent cocktail of resurrected blues-rock riffs, screaming psychedelia and murky atmosphere that transcended music of the time.  Listening to it now, it seems unbelievable that the record was created in the mid eighties.  And yet it has enough power – and melodic charm – to still sound great.

In late 1988 I had become obsessed with Electric, the full-on rock monster that the Cult had released a year earlier.  A friend lent me a copy of Love, promising that the songs contained therein were the best the band had recorded.

At this point I had explored some rock, metal and punk.  Love was to be a bridge between these genres in many ways.  Happily it was (what would become) “alternative” rock – though it worshipped at the altar of Hendrix, The Doors and Led Zeppelin, it was birthed from the fire of punk rock.

Opening track “Nirvana” kicks things off in blazing style.  It has a fast pace and contains a euphoric instrumental section.  Both “Big Neon Glitter” and the title track “Love” offer up the Big Zep riffs and allow guitarist Billy Duffy to add a psychedelic shimmer.  Then “Brother Wolf, Sister Moon” provides a quieter moment.  If the earlier tracks were ideal for blasting out the windows of a 1970 Dodge Challenger, this track is more singer Ian Astbury sitting on a pony surveying the prairie.  As the song ends, rumbling clouds herald the next track: “Rain”.  One of the best songs the Cult have ever recorded, “Rain” has a truly classic riff that is instantly recognisable and never forgotten.

Side Two (!) opens with “Phoenix”.  This track, unashamedly adorned with Hendrix inspired acid rock guitar, hints at the heavier sounds to come in later chapters of the bands story.  “Hollow Man” provides more driving bass (Jamie Stewart) and a simpler, melodic lead guitar.  Astbury has the chance to really shine on ballad “Revolution”, with a calmer moment that harks back to the bands Goth post-punk phase.

Next we have the mother of all Cult songs – “She Sells Sanctuary”.  A vaguely Eastern sounding intro leads into a stomping rhythm as the song grabs the listener and drags them along for the sheer hell of it.  This song became an instant favourite and still has an impact all these years later.  Final track, “Black Angel”, is a sombre Velvet Underground do Spaghetti Western affair that again adds some darkness to the proceedings.

The band received a lot of criticism for having a somewhat “hippie-ish” element to their sound, and look, on this album.  There are a few moments where the “peace and love” vibe wear a bit thin (see “Revolution”), however the overall sound of the record retains a dark edge to it – more decadent than naive.

The Cult would go on to fully embrace their heavy rock interests with Electric.  But for a kid who had never heard Zeppelin or Hendrix, Love was a monumental discovery.  Put it on and listen to it now, this record has a magic that is of it’s time and yet speaks of the past and future.